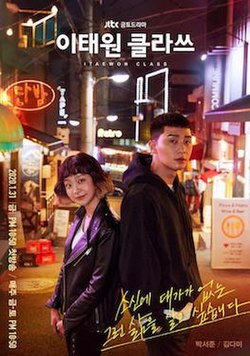 Itaewon Class is a 2020 South Korean television series about the Itaewon Area. It is Showbox’s first production and is based on the webtooon of the same name. The series aired on JTBC in Korea from January 31 to March 21, 2020, and is available worldwide on Netflix. At the 25th Asian Television Awards, the series received Best Drama Series honors.

Park Sae-Ro-Yi (Park Seo-Joon) punches his classmate Jang Geun-Won (Kim Jung-Rok) on the first day of school, who was bullying another student. The bully is the son of CEO Jang Dae-Hee (Yoo Jae-Myung). Park Sae-Ro-Yi’s own father works at Jagga, a restaurant chain run by the bully’s father.

He is imprisoned for the savage beating. Park Sae-Ro-Yi decides to destroy Jagga and avenge Jang Dae-Hee and his son Jang Geun-Won by destroying the company. Once Park Sae-Ro-Yi has been released from jail, he establishes a restaurant in Itaewon, Seoul. Jo Yi-Seo (Kim Da-Mi), who is well known on social media, joins Park Sae-Ro-Yi’s restaurant as a manager. She has romantic feelings for him.

The JTBC’s “Itaewon Class” takes over the channel’s Friday and Saturday 23:00 time slot previously occupied by “Chocolate” and followed by “The World of the Married,” which will premiere on March 27, 2020. Based on Jo Gwang-Jin’s webcomic “Itaewon Class.”

“Itaewon Class” is the first drama series to be produced by Showbox, a movie business. The script reading was held at JTBC’s headquarters in Sangam, Seoul, South Korea, on August 2019.