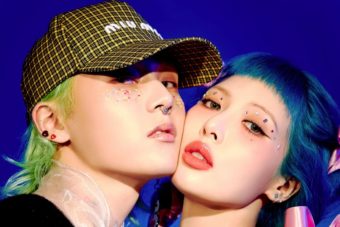 Fans of K-pop stars HyunA and DAWN were left stunned this week after they announced their engagement to one another. When did the two begin dating, though?

The pair kept their relationship under wraps for several months before finally announcing it in 2018. The K-pop world was shocked and delighted at the same time when they confirmed their romance. Many fans are aware that dating is a touchy issue in South Korean culture, with entertainment businesses urging stars not to date or keep it low-key if they become involved.

HyunA and Dawn began dating in May of 2016, according to Soompi. However, the pair made their relationship public to their fans just two years later, in 2018, with a statement.

While operating in Triple H, the Cube Entertainment K-pop band, the two developed a closer connection. HyunA was formerly a member of the girl group 4minute, while Dawn was previously a member of the band Pentagon. During her appearance on Knowing Bros, according to KoreaBoo, the 29-year-old pop singer confessed that she had one-sided feelings for Dawn in the past.

“It was me… This is so embarrassing, but it was me who liked him first. I waited a year and a half for him” she said.

So she took a chance and confessed her feelings to HyunA, which is what she did. “So I had a few drinks at this location close to my home, but I’m not really a big drinker. So, I got a little tipsy. I decided to go for a walk off it, then called Dawn and told him how I felt,” she said.

Despite the K-pop business’ preference for celebrities not to date each other publically, these two lovers shattered the norm and expressed their affection through social media and a number of events.

HyunA and Dawn Get Engaged

On February 3, the couple revealed their identical engagement rings on Instagram. Dawn, 27, displayed the ring and wrote in the caption: “Marry Me.”

Fans of the stars, who’ve always been kind to their relationship, were overjoyed by the news that they’d made it official.

Fans Reaction After The Announcement

The news of HyunA and Dawn’s engagement sent K-pop fans into a frenzy. Here are some of the most prominent comments.