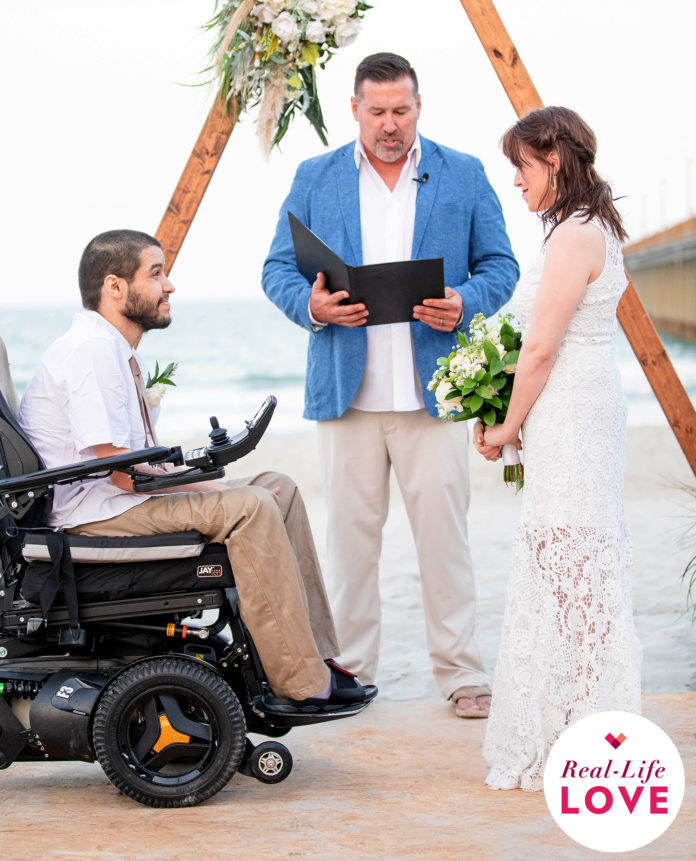 Emily Draper Knisley’s the love of my life,” Hunter tells People. They have been linked since birth. Emily was delivered just four hours after Hunter at Fairfield Medical Center in Lancaster, Ohio, and their Social Security numbers are only one digit apart.

At the age of eight, Hunter was diagnosed with Becker Muscular Dystrophy, which is a comparable but less frequent and slower-progressing form of Duchenne Muscular Dystrophy. Physical activity may be difficult to impossible for some indicators.

“When I started playing T-ball, I ran different than the other kids and I was a lot slower,” Hunter says. Regardless, “I thought he was adorable,” says Emily, who was a year behind Hunter at Sheridan High School in Thornville, Ohio.

However, the two were so caught up in each other that Hunter couldn’t get out a word when she attempted to converse with him. “She was so pretty that I was so shy and I didn’t say anything to her,” he says.

Cut to ten years later: In January 2019, Hunter saw a photo of Emily on his Facebook feed. He sent her a message to say hello. “I was like, ‘Hey, why not check in?'” he recalls.

They bonded over a mutual love of Destiny’s Child, the Backstreet Boys, Johnny Depp films, scary movies, and Harry Potter. “Right off the bat, we felt like we were best friends,” Emily says of their meaningful conversations, including their 13-hour initial chat.

They met in the summer of 2018 and dated for a few months. In March 2019, they went on their first date. Hunter’s sense of humor won her over quickly. “He’s quirky and he’s a fantastic guy,” she adds.

“We click,” Hunter adds. “And she’s gorgeous. I can’t stress that enough. She’s just a really good person and just wonderful to be around.”

On their third date, Hunter informed her that muscular dystrophy patients with his kind of disease had a high incidence of heart failure. He said he wasn’t sure how much longer he would live. “I told her about the uncertainty surrounding my health and when it may deteriorate, whether that be today or in a year,” Hunter recalls. “I was very honest regarding it.” Emily went home and gave it considerable thought. She has two young girls from a previous relationship, and this news would have an impact on them as well, she realized. Finally, she understood that no matter who she married, life was not guaranteed.

Everything was going well, so he planned to pop the question in December 2020. Because Emily’s divorce hadn’t been finalized, they couldn’t get married formally just yet. Wedding bands with each other’s initials were tattooed on their ring fingers as a substitute.

Doctors predicted that if Hunter had a son, he would not get muscular dystrophy, but if he had a daughter, she would be a carrier. “I’ve always wanted a son,” says Hunter. “It was my dream.” But their new life as a family of five was about to be turned upside down. About a month ago, Hunter went for a routine echocardiogram at Nationwide Children’s Hospital.

However, the doctor informed Hunter that he was in end-stage heart failure and had only a few weeks to live. He was immediately admitted to the hospital.

When Hunter informed her that her husband had been killed in a car accident, she was picking up her daughter from school.

Doctors asked if Hunter had a last wish, to which he replied that he’d want to get married in Myrtle Beach, South Carolinaand take his children to see the ocean. Emily claims she contacted her lawyer and pleaded for the divorce to be finalized so that she could marry her soulmate before he died.

The family of a golfer who died at the hospital in 2013 reached out to Parent Project Muscular Dystrophy, who connected them with Amanda McDowell, a Myrtle Beach wedding planner. After working for years as a nurse at Nationwide Children’s Hospital’s Muscular Dystrophy Clinic, McDowell — who calls Hunter “a kind soul” — volunteered her time and services without charge owing to donations from local businesses.

“I thought, ‘I’m going to do whatever I can for these guys. They deserve it,'” McDowell tells PEOPLE. “I just felt like God just orchestrated this whole thing for them, just to give them hope in the midst of bad news. They needed this right now.”

Their kids were ecstatic, and so was everyone else in the wedding party. As Delanie pulled her siblings in a wagon down the aisle, “she was squealing and leaping up and down,” according to Emily. “They all seemed ecstatic.” Then came their first dance, to Kenny Chesney’s “Me and You.” For Hunter, it was “the happiest moment of my life.” Emily agrees.

Hunter is spending his last days with his family doing all of the things he loves to do, such as watch movies, play with the kids, and listen to Emily sing. “It’s like an angel,” he says of her voice. On Saturday, Emily surprised Hunter by making another one of his dreams come true: seeing their son play football.

She gathered 25 of his friends and family (including a few of Hunter’s primary teachers) at the high school’s football field, where everyone stood on the sidelines while Hunter and Maverick ran onto the field in matching jerseys. “It was one of Hunter’s dreams he’ll never be able to realize — and never get to see his son perform,” Emily adds.

The three ran from the 50-yard line to the end zone, accompanied by Emily beside Hunter’s wheelchair. The crowd erupted when they scored a touchdown, and former members of the color guard reenacted the school’s fight song. Emily says that she is experiencing “a lot of feelings” as a result of these bittersweet events.

“When I met Hunter, I knew that this was the outcome. I just never knew when,” she says. “I’m sad that it’s so much sooner than we expected, but I am so happy and thankful that he did randomly message me, and that we’ve had the time together that we’ve had, and we had a beautiful son. My girls just love him. He is dad.”

Hunter’s health has improved somewhat since the beach wedding, and he claims to be in “really good” condition. It appears that his medicines are keeping him stable. “They’re not sure how long it’s going to last,” Emily says. “But they said it could possibly be months now. They said they couldn’t guarantee it, but they said there’s a possibility.”

They remain optimistic — and grateful for each day. “Always keep your head up and keep going, no matter how hard things get,” says Hunter. “Because time is everything.”