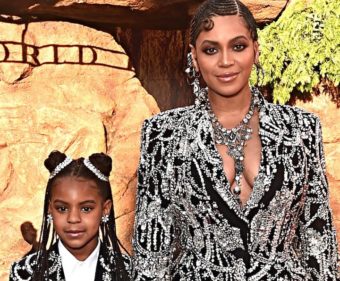 Tina Knowles Lawson recently posted a photo of Blue Ivy on Instagram, wishing her a happy birthday and comparing the toddler to her grandmother.

Blue Ivy Carter, the daughter of Beyonce and Jay-Z, celebrated her tenth birthday on Friday, January 7. Many fans took to Twitter to wish Blue Ivy a happy birthday. Others were interested in Blue Ivy’s stature, however.

How tall is Blue Ivy?

In Tina Knowles’ birthday tribute to Blue, the 10-year-old appears almost as tall as her grandmother.

Tina’s height is between 5ft 5 inches and 5ft 7 inches, depending on how you measure her. In the photograph, Blue was wearing a pair of white sneakers while her grandma stood barefoot on the beach.

Based on Tina’s recent blog entry and another photo Beyonce recently posted of Blue Ivy, we estimate that Blue Ivy’s height is between 4ft 8 inches and 5 ft. Blue is a bit taller than her grandma Tina in the photo because she’s on a slightly higher part of the beach.

Tina Knowles Pays Tribute To Grand Daughter On Her Birthday

Tina, who is 68 years old, rocked a polka dot dress for the snap, while Blue went with a black jacket over a white top. Sunglasses and loose hair were also part of her look. Tina, the matriarch, penned a heartfelt caption for her granddaughter’s special day.

Blue Ivy turns ten today, and her proud grandmother posted a photo of the pair together. “My wonderful Granddaughter Blue Ivy turned 10 years old today! It appears to me that you were born into this world already running things,” she wrote in her caption.

Her grandma also wrote, “Blue gives the best advice like a grown person I sometimes forget that she is so young!!! Blue is one of those rare gifted people that can do everything well! God Blessed me the day you were born! My Sweet, Beautiful Baby Blue❤️❤️❤️🎂🎂💥Happy Birthday 🎂❤️🙏🏽

Blue Ivy’s latest metamorphosis inspired ecstatic responses from her followers. Here’s what they thought of her most recent shot.