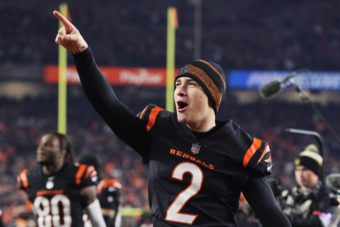 The name was chosen in reference to the Cincinnati Bengals’ slogan, “Geaux Bengals,” which means ‘Go Blue.’ You might explain it as the Cajun saying of the same meaning.

Last week, the Cincinnati Bengals defeated the Las Vegas Raiders in the Super Wild Card Weekend. The Bengals won 26-19 against the Raiders and will now compete against Tennessee for a spot in the Divisional Round. Geaux Bengals was a popular hashtag before the game, so here’s what it all means.

The term Geaux actually originates at LSU. The incoming graduate class is greeted with the GEAUX program, which is pronounced “go” as in “Geaux Tigers,” at Louisiana State University. ‘Louisiana State University, LSU, in Baton Rouge recognizes the surrounding region’s Cajun influence by playing on the (Cajun-) French language and using GEAUX, which is “GO!” as motivation for its athletic teams,’ according to one online commenter.

The LSU had both Burrow and Chase in attendance, while the Bengals’ Joe Burrow and Ja’marr Chase have a connection.

During LSU’s 2019 National Championship run, the two connected 84 times for 1,780 yards and 20 touchdowns, demonstrating excellent chemistry. Now, both players are in Cincinnati, and both LSU fans and Bengals fans say “Geaux” to boost their squad.

Coach O would always end his interviews for LSU with the signature phrase, “Geaux Tigers,” but because he isn’t there anymore, the interviewer asked him if he’d say Geaux Bengals.

That’s right, and it was a resounding success.