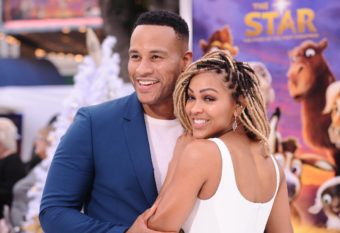 After nine years of marriage, Meagan Good and DeVon Franklin are calling it quits. Does the Harlem star have any children with her spouse? Here’s a look at their relationship, marriage, and overall net worth.

Meagan is known for her work in films such as Shazam, The Unborn, and One Missed Call, among others. Meanwhile, DeVon is a well-known producer and author. Meagan collaborated with him on his New York Times best-seller book The Wait.

Does Meagan Good have kids with DeVon Franklin?

They were together for almost a decade, but they have no children. They first met when they worked on the film Jumping the Broom in 2011. It didn’t take long for them to progress into the next stage of their relationship, getting engaged just a few months later in May 2012.

They exchanged vows in a Spanish and bayou-themed wedding that was attended by celebrity guests including Derek Luke and Tasha Smith. Meagan and DeVon were truly smitten with each other. Gushing about the producer, Meagan told PEOPLE at the time, “DeVon makes me better, makes my life fuller, and completes my quality of life.”

DeVon added to that, “I’ve never had more peace, fun and joy than I’ve had with her.”

The Couple Address Their Separation

There is no animosity between Meagan and Deven. The pair revealed their decision to split up in a joint statement to PEOPLE. “After much prayer and consideration, we have decided to go into our futures separately but forever connected,” it reads.

“We celebrate almost a decade of marriage together and a love that is eternal. There’s no one at fault, we believe this is the next best chapter in the evolution of our love,” the statement further says.

A Look At Their Collective Net Worth

The success of Meagan and DeVon as a couple was attributed to their individual accomplishments and success, making them one of the most powerful couples in Hollywood. According to Celebrity Net Worth, Meagan has a net worth of $10 million, however DeVon shares an identical fortune.

They are believed to be worth a combined $20 million. Their decision to split comes as a surprise to fans, who previously saw the pair sharing charming social media posts together.

Meagan posted two cryptic Instagram stories regarding “healing” and “making people understand it’s a privilege to be in your life” after the news of their split became public.