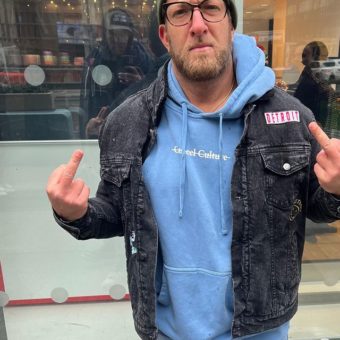 David Portnoy is one of the most recognized personalities in the entertainment business, having played El Presidente of Barstool Sports. The 44-year-old is well-known for his robust and extroverted attitude, and because he’s so visible, there are always reports about his dating life.

That said, we investigated his love life over the years since Dave tends to keep quiet about it.

In 2021, Page Six reported that David and Silvana were “looking cozy” after having been partying together. Silvana has since posted several photos of the two of them together on social media, and it appears to be a full-fledged relationship.

In fact, there are persistent reports that they got matching tattoos to seal their relationship.
Dave was previously linked to a former professional cheerleader.

According on Instagram stories, Shannon has been sharing photographs of herself hanging out with David recently, indicating a relationship is developing between them.

However, according to both of them, they were merely hanging out together as friends. Prior to his relationship with Silvana, however, his activities with Shannon were the most public he’d been in a relationship (potential).

Who else has David Portnoy previously dated?

In May 2019, a beautiful blonde woman was seen with him at the Preakness Stakes horse race. Her name is Claire Jacobs, according to Reddit followers.

They haven’t been seen together since then, so we’ll guess they didn’t create anything long-term out of it. In 2017, he was linked to Jordyn Hamilton, but the two split owing to her cheating on him with a Soul Cycle instructor.

The drama and their break-up were very public and widespread on social media. In December 2019, a sex tape allegedly featuring him with an unidentifiable woman flooded the internet.

He followed up with an “official press release,” mocking the entire thing and saying that he could not confirm nor deny that it was him in the video.

“As many of you have seen by now, there is a NSFW video circulating that is taking the internet by storm,” he began. “The unidentified male appears to be in peak physical shape, highlighted by (but not limited to) the muscle strength, agility, and stamina to perform a highly-difficult sexual maneuver.

You have to imagine an athlete like that would be playing professional baseball if not for a debilitating shoulder injury, hypothetically speaking of course.”

Who is Victoria Pedretti dating?

Has David Portnoy been married?

Many people are unaware that Dave Portnoy was married to Renee Portnoy from 2009 until they formally announced their split in 2017 (the same year his relationship with Jordyn started).

They first met in 2005 and engaged in 2008. They have no children together.After several years of marriage, Renee and Dave reportedly got back together in April 2018.

It’s unclear if they ever went through with their divorce, but they’ve said that they maintained a friendly relationship for the sake of their dogs.

Despite Dave’s prominence as a Barstool personality, Renee has remained out of the limelight.