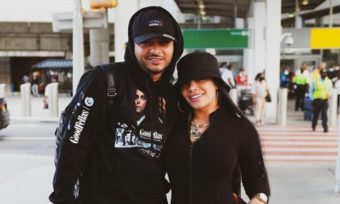 Flow La Movie, his longtime partner Debbie Von Marie Jiménez Garcia and his 4-year-old son Jayden Hernandez were among those who died in Wednesday’s crash. Music producer Flow La Movie was among nine people who died Wednesday in a private jet crash in the Dominican Republic.

The other passengers, also all U.S. nationals, have been identified as Kellyan Hernández Pena, 21, and two teenagers aged 18 and 13, whose relationship to the couple has not been publicly confirmed.

Also killed was Veronica Estrella, 26, who was identified as a crew member on the manifest but as a passenger by the plane’s operator.

According to PEOPLE, Debbie was 31 years old when she died. She was Jose’s girlfriend of seven years and the mother of his four-year-old son. They had named their son Jayden Hernandez after receiving permission from authorities to do so.

Debbie was a self-made entrepreneur and social media influencer. She created her own line of clothing called “Stilo by Debbie.”

During the call, I noticed that she had posted several photographs with Jose and their son. According to her blog postings, it appears that she traveled frequently and led a luxurious lifestyle.

Her most recent post featured her sitting in an airplane. She captioned it, “And if no one believes in you, show them!” #goalslifestyle”

Who Was Jose Angel Hernandez?

He worked with some of the most popular Latin musicians. Bad Bunny, Nicky Jam, and Ozuna’s Te Bote topped Billboard’s Hot Latin Song charts for 14 weeks, thanks to him.

He has launched his own record label, in which he signed artists like Nio Garcia, Casper Magico, D.OZi, and Xound.

Who Else Was On The Plane?

The second passenger has been positively identified as a US national, Kellyan Hernández Pena (21), while the three teenagers aboard the flight have not been named. 26-year-old Veronica Estrella is the other victim. However, it isn’t clear if she was a crew member or a passenger on the plane.

Both the pilot, Luis Alberto Eljuri Tancredo, and Emilio Herrera, the co-pilot, died in the accident. They were both 47 years old.