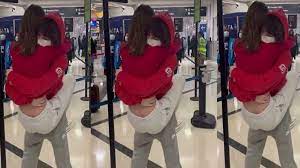 A Tik Toker couple met after years of being apart, and a video has gone viral on social media sites. Yes, we’re talking about the outspoken Tik Tokers Cora Tilley and Christian, who are becoming increasingly well-known due to their touching reunion at the airport.

The viewers’ emotions got the best of them; they were ecstatic at seeing their video. Seeing his or her video elicited strong feelings in them. The clip has been shared all over the internet. In this article, we’ll tell you everything you need to know about TikTokers and their viral video.

Cora and Christian are two of TikTok’s most popular couples, and their relationship has always inspired their followers. On the days leading up to their long-awaited encounter, the pair posted several updates on each other’s social media accounts.

Cora published updates about Christian’s flight and the countdown on Instagram. She said she was “about to puke” in one of her messages as she waited for her boyfriend to arrive.

Meanwhile, Christian updated his followers on Instagram and Facebook about his journey, revealing the same excitement as before regarding seeing his girlfriend.

Where Do The TikTokers Live?

Cora and Christian’s love affair is well-known, but when did they start dating is unclear. They’ve done a variety of duets and have been featured in each other’s TikToks from various places.

Cora, it appears, lives in Florida with her family. Christian’s Instagram bio claims he is from Michigan. It also indicates that he’s 17 years old.

As for their appeal on TikTok, Christian, who uses the moniker @chritianbanned, has over 1.3 million followers on his primary account. Cora, however, is using an alternate account following her main being removed from TikTok in July. It’s not clear why her account was removed; it just hasn’t been reactivated yet.

Who is Isabel Pakzad? Age and career of James Franco’s beau explored

Cora Tilley and her partner Christian are getting popular on social media after posting a video of their encounter. The film has been widely distributed across the internet. People have been reacting to it throughout the video. The pair’s romance has elicited strong feelings from the public. Cora Tilley’s enthusiasm is apparent in the movie. She was ecstatic to meet his boyfriend, according to the clip. They’re quite famous on TikTok as a couple, apparently.

Cora Tilley and Christian are well-known Tik Tok celebrities. They have a huge fan base. Their followers consider their relationship to be inspirational. On the days leading up to their meeting, the couple has shared numerous updates on social media sites, including her personal Instagram where she chronicles her boyfriend’s journey with the countdown. It was stated in one of her stories that she was going to vomit because he had arrived.

Meanwhile, she was giving out all of the information regarding his arrival. She remarked that she is thrilled. When Christian’s boyfriend arrived at the airport, we saw her run towards him and cling to him tightly in the video. He also carries her in his arms. They later expressed their affection for one another. In the movie, you may observe a pair who are clearly in love with each other.

However, there is not much information is available about when and how they started dating, how they met, and more. The duo has made several duet videos in which they can be seen in different locations. As per the reports, Cora is living in Florida with her family members. As per Christian’s profile, he is from Michigan and is only 17 years old. He has gained more than 1.3 million followers on his Tik Tok account. Stay tuned with us for more updates.