Who is Chloe Cherry as actress joins S2 Euphoria cast? 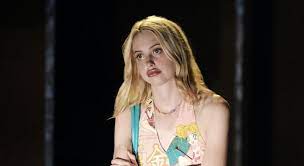 Zendaya, Hunter Schafer, and Sydney Sweeney are all returning to the series after its second season premiere on Sunday (9 January).

While several of the season one regulars are back in the new series, it also introduces new characters such as actress Chloe Cherry. Who is the newest addition to Euphoria, though? Let’s have a look…

In the second episode of Euphoria’s second season, Actress Chloe Cherry made her television debut as Trying To Get To Heaven Before They Close The Door.

In the opening episode of season 2, new Euphoria character Faye is introduced to audiences as she listens to Rue in Fezco’s car. According to Decider, this is not the character’s final feature, as Faye will return in the new series in a storyline involving Fezco.

Who is Chloe Cherry?

Chloe Cherry is a 24-year-old adult film actress who started her career in the industry in 2015, aged 18.

Chloe Cherry began acting in grade school, before branching out into the adult business. She’s also appeared in more than 170 other adult films, according to her IMDb profile.