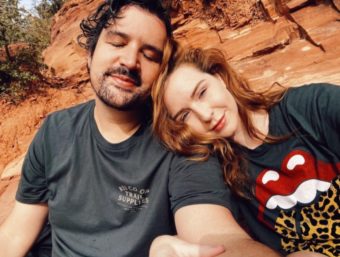 After two years together, Camryn Grimes has announced that she is married to her partner Brock Powell. After some of her Young and the Restless costars publicly stated their desire to marry Melrose Place star, Brock Turner, they began to inquire about him. So who is he? Here’s everything you need to know about Brock, including his age, career, and social media accounts.

Congratulations to Camryn Grimes and Brock Powell on their engagement! The actress revealed the fantastic news via a social media post on Twitter and Instagram, including two recent photos of the delighted pair.

The first picture shows Camryn and Brock in the distance, with a closer look at her magnificent engagement ring, while the second picture reveals the romantic proposal scenario.

“You and me, we’re in a club now,” Camryn captioned her post which is Ellie’s quote from the animated movie Up.

Who Is Brock Powell?

Brock Foster Powell is a 33-year-old voiceover artist with an illustrious track record. The actor’s most recent job was as Mickey Mouse in the Funhouse, Edens Zero, Re: Zero kara hajimeru isekai seikatsu, and Baymax Dreams on television. Furthermore, Brock has voiced prominent video games including Genshin Impact, Werewolf: The Apocalypse – Earthblood, and The Last of Us: Part II.

You may listen to some of Brock’s sample voiceovers by going to the actor’s profile on Dean Panaro Talent’s website.

On Instagram, Brock goes by the name of brocktalks and has almost 3,000 followers. He reposted the same two photos from his engagement announcement as well as a quote from Up that reads: “I have just met you and I adore you…”

Brock’s Instagram bio says that he uses the pronouns he/they/them.