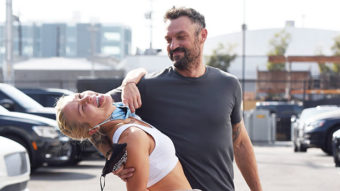 Brian Austin Green is already dad to three children with ex Megan Fox as well as a 19-year-old son from a previous relationship. The Dancing with the Stars Pro, 36, is pregnant, expecting her first baby with boyfriend Green. The Beverly Hills, 90210 is already dad to kids Journey River, 5, Bodhi Ransom, 7, and Noah Shannon, 9, with ex Megan Fox as well as 19-year-old son Kassius from a previous relationship.

The couple, who started dating five months after Green confirmed his split from Fox after nearly 10 years of marriage in May 2020, were photographed in Hawaii where Burgess put her baby bump on display.

In one photo, Green, 48, cradles his girlfriend’s belly while the two look lovingly at one another.

He has four children from two previous relationships, three of whom are sons: Noah, 9, Bodhi, 7, and Journey, 5.

Brian also has a 19-year-old son, Kassius, with Beverly Hills, 90210 actress Vanessa Marcil. The actor’s fifth child and only one with Sharna Burgess will be the arrival of their new baby.

Inside Brian And Megan’s Relationship

In October, Green and Burgess celebrated their one-year anniversary, with Green writing on Instagram at the time, “1 year of accepting me in a way I’ve never been loved before #damnimlucky.”

“We met at a coffee shop, then had a few dates and then we were locked in a house together,” Burgess told PEOPLE in June of her love story with Green. “I was grateful for that because it allowed us to really take our time, and it was really awesome.”

“I wasn’t sure what that meant until the first time we kissed, and then it was the attraction and a whole bunch more. It was really cool,” Green said. “And we really have the same moral compass.”

He has a son with Vanessa Marcil

After meeting on the set of Beverly Hills, 90210 in the 1990s, Brian has a son with actress Vanessa Marcil. The actor is best recognized for playing Gina Kincaid in the American drama series.

Her other prominent roles include Brenda Barrett on General Hospital and Sam Marquez on Las Vegas. They got engaged in summer 2001 and then welcomed Kassius into their lives in March 2002. However, their romance was short-lived, and they called it quits not long after.