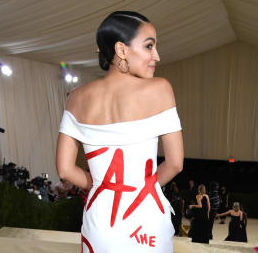 At the 2021 Met Gala, Congresswoman Alexandria Ocasio-Cortez caused a stir with her unusual yet statement-making dress. Designer Aurora James styled Ms. Cortez for the occasion. AOC managed to turn many heads at the 2021 Met Gala.

On the red carpet, Steyer arrived in a figure-hugging white off-shoulder dress with ‘TAX THE RICH’ written on the back. While the powerful statement of this garment was recognized by many, others were not so pleased.

On Twitter, a discussion about the dress began soon afterward, leaving some users deeply divided in their viewpoints. Aside from the clothing itself, the designer of this outfit also received a lot of attention.

Who Is Aurora James?

Aurora is a Canadian fashion designer and the creator of Brother Vellies, a New York-based footwear and accessory line.

In 2013, Aurora launched the brand, which sells handcrafted and environmentally responsible fashion items. Brother Vellies was established with the aim of ensuring that traditional African design methods were maintained, according to the business’ official website.

The designer, who hails from Canada, has a background in fashion, journalism, photography, art, music and horticulture. She has already amassed over 200,000 followers on Instagram thanks to her amazing work.

The designer is also the founder of the 15 Percent Pledge, a nonprofit organization dedicated to assisting Black-owned enterprises.

AOC’s custom-made gown costs an unknown amount, however we learnt from the Brother Vellies website that the shoes worn by the politician are available for over $1,000 a pair.

With a red bag that read ‘TAX THE RICH,’ Alexandria Ocasio-Cortez completed her look. Many Twitter users wondered why, despite the dress, the Democratic congresswoman attended the event with Kim Kardashian, Kendal Jenner, Megan Fox, J-Lo, Grimes and other affluent A-listers.