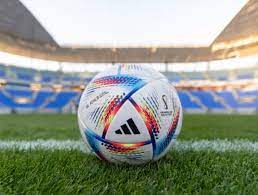 Today has been a joyous day for football fans as the 2022 World Cup ball was unveiled. With just 236 days until the tournament begins in Qatar, the qualification process is well underway, and the much-anticipated draw will take place on Friday (April 1st).

The name of the official match ball has sparked much debate among football fans. Its design has certainly received a seal of approval, but what exactly does ‘Al Rihla’ imply? Continue reading to learn more about it. ‘Al Rihla’ Meaning Explained: Adidas Reveal World Cup 2022 Ball.

It’s the moment we’ve all been waiting for: the official World Cup 2022 ball has now been revealed, and it’s rather magnificent. The ball is made by Adidas, who have provided the balls for the previous 14 tournaments and designed it to appear over a pearlescent white backdrop with a vivid blue, red, and yellow color scheme that swoopes across it.

It has a unique panel shape and surface textures that provide the highest level of accuracy because it is the quickest World Cup ball ever produced, as well as an Adidas Football Graphics and Hardwear Design Director Franziska Loeffelmann said: “Accuracy and flight stability are becoming increasingly crucial as the game speeds up. “

“The new design allows the ball to maintain its speed far longer as it flies through the air. We set out to make the impossible possible with bold invention by creating the fastest and most accurate World Cup ball yet,” he concluded.

Name Of The Ball Is ‘Al Rihla’

The “Al-Rihla” is the official name of the ball, which means “journey” in Arabic. Qatar is where the 2022 World Cup will be held, and it’s spoken there. The design of the ball was inspired by Qatar’s architectural traditions, notable vessels, and national flag.

‘Al Rihla’ is a completely water-based ink and glue creation. “This is a stunning, long-lasting, high-quality official match ball from adidas that will be played with by top performers on the world’s largest stage in Qatar as well as grassroots players everywhere,” FIFA’s director of marketing, Jean-François Pathy said.

How To Get Your Hands On One

The official World Cup 2022 ball is available for purchase on the Adidas website. It went live online on March 30th and will be available until April 12th, when it will sell out.

The ball costs £130 and may be purchased in stores or online. For £15, you can get a micro replica of the World Cup 2022 football here.

The net profits of each ball will be donated to the Common Goal, a charitable movement founded by Spanish soccer player Juan Mata.

Common Goal encourages football players, coaches, and other groups to contribute at least one percent of their pay to a global fund that funds sports-related charities across the world.