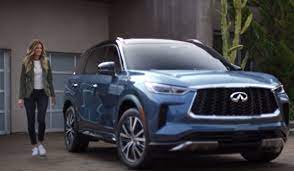 For a variety of reasons, the newest commercial for the Infiniti QX60 has gotten a lot of interest. Aside from the vehicle’s features, which are shown on a beautiful screen, the ad also includes a well-known face. So, who is the young lady in today’s commercial video?

In July 2021, Nissan’s luxury vehicle brand collaborated with several celebrities to provide its clients a one-of-a-kind experience via Q&A sessions.

If you’re a die-hard fan of the NFL or Dancing With The Stars, you’ll undoubtedly recognize the individual in Infiniti’s new ad. Erin Andrews, a well-known American sportscaster and television personality, is the subject of the video.

In the luxury SUV commercial, she gives an “unscripted” evaluation of the vehicle. As she drives into the back of the building, Erin displays the features as she sits inside, and as the seat reclines to show her in a comfortable position, she jokes, “you don’t want me to fall asleep on the job.”

“The QX60 totally suits my vibe,” says actress Erin Moriarty in the commercial, which has been airing over the past week. “This automobile is bossy; she’s rich and rich.”

Many people have taken to Twitter to voice their opinions on seeing Erin in the Infiniti commercial. The majority of them don’t seem pleased about it. One wrote, “If I have to watch this Infiniti commercial with Erin Andrews talking to the car and saying, “She rich… She rich, rich,” one more time, then I am going to put a wine-opener into my eardrums.”

Another added, “Erin Andrews in the Infiniti commercial is so cringe”

“I hate this Erin Andrews Infiniti commercial almost as much as the Gronk USAA commercial,” said another user on Twitter.

According to Celebrity Net Worth, she has a net worth of $30 million. She has worked for ESPN and Fox Sports, covering events such as the Super Bowl and World Series. She began dating Jarret Stoll, a hockey player, in early 2018. They reside in Los Angeles.