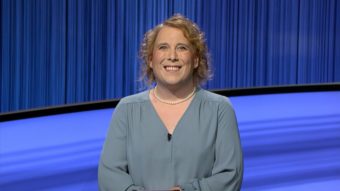 Amy Schneider, a ‘Jeopardy!’ contestant, is on a winning streak that has fans riveted to their TVs. Fans are interested in learning more about her personal life, including her relationship with her partner, since she has become one of the show’s most successful money winners ever.

In November 2021, when the ‘Jeopardy! Tournament of Champions’ is held, Amy will be making history as the first transgender individual to appear on the show.

Does Amy Schneider Have A Girlfriend?

Amy has been open about her gender transition and personal history. Amy took to Twitter on December 8 to reveal that she is dating her girlfriend, Genevieve.

She explained in a series of tweets that it was “love at first sight” and Amy knew the moment she saw Genevieve that she was “going to be in my life for a long time.”

Amy met her partner through one of her friends, Amy’s girlfriend is Genevieve. nGenevieve is the younger sister of Amy’s friend’s beau.

“For various reasons, we didn’t actually start dating until February 2021, but that time as friends was really valuable, and we both think we have a long future together. Finally, in March, we completed our family when we adopted a cat, Meep,” Amy wrote in another tweet.

In the same thread of tweets, Amy shared that she was previously married.

During the run of Taming of the Shrew, she ran into her prior spouse while performing. They relocated to Oakland in 2009 to pursue her dreams in stand-up comedy. However, in an interview with Hello Giggles, she clarified that the reason for their divorce was not due to any adultery. In 2016, they divorced but she has yet to disclose why it happened.

“Now, when I say I realized I was trans in 2016, I’m simplifying a process that in some ways had been going on my whole life, and certainly since 2011 or so, but 2016 was when I finally realized that I was living a lie, and began to let my true self show,” the following tweet read.

Amy Waited A Long Time To Come On Jeopardy

It’s been a decade since Amy was chosen to appear on the popular game show by the end of December 2012. She also mentioned that she used to be a “white guy” when trying to get on the program in her first attempts.

“The reality is that for the first few years of that, when I was trying out, I was, as far as any of us knew, a standard white guy. And there’s just more competition for those slots on Jeopardy!,’ Amy said.

Amy was born and reared in Dayton, Ohio, where she spent her early years. She obtained a bachelor’s degree from the University of Dayton.

Who is Tyler Hynes Girlfriend? Is He Married?