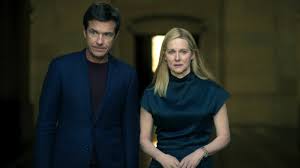 Some Ozark fans are wondering who played Wendy Byrde’s father in season 4, which premiered this week on Netflix. Season 4 of Ozark debuted on Netflix on Friday (January 21). In the present episodes, viewers are introduced to Wendy Byrde’s father, but who is the actor behind the role?
We need to identify who plays Nathan Davis on the new series and why they may be familiar.

Nathan Davis, the father of Wendy Byrde’s estranged mother, is first seen in episode four of the new season, Ace Deuce. In the episode, Mel Sattem uses her detective skills to locate Nathan Davis as part of her investigation into Ben and Wendy’s brother’ s disappearance.

Richard Thomas plays Nathan Davis. However, Thomas does not appear to have any credit for his IMDb page’s Ozark role at the moment.

Why does he look familar?

For more than six decades, British actor Richard Thomas has been a mainstay on both television and the big screen, thus it’s no surprise he has several memorable parts.

He began his career as a youngster, appearing in a number of shows and pictures before getting his biggest role as eldest son John-Boy in the CBS series The Waltons in the 1970s.

He followed this with a series of roles, including the epic Original 1973 Battlestar Galactica and its 1978 sequel. He then took on hosting reality show It’s A Miracle, which aired from 1992 to 1997.

What are some of Richard Thomas’ recent credits?

Others have wondered what Richard Thomas has been up to in recent years, especially after seeing his more dramatic portrayals.

Thomas has had frequent on-screen appearances, including guest parts on well-known series such as Law & Order, Chicago P.D., and NCIS: New Orleans. He also starred as Frank Gaad on espionage drama The Americans from 2013 to 2016.

In 2021, the actor had a number of credits to his name, including an Amazon Original series Tell Me Your Secrets and a Netflix film The Unforgivable, along with Sandra Bullock.