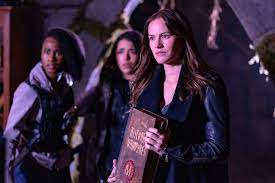 All five seasons of Van Helsing are now available in all parts of Netflix worldwide, with the exception of the United States, which is still waiting for the fifth and final season. The good news is that while you wait a bit longer, Season 5 is available on Netflix in April 2022.

Van Helsing, which was inspired by a graphic novel series, concluded in 2021 with the fifth and final season on Syfy. Kelly Overton has played the lead role of Vanessa Van Helsing in every season of Neil LaBute’s fantasy horror series since it first aired in 2015. Season 5 wrapped up on Syfy on June 25th, 2021.

Syfy content has been gradually leaving Netflix in recent years as the parent company, Comcast, gives its programming exclusively on its own platform Peacock. Given that it’s on a contract that was struck before Syfy’s library was transferred to other services, Van Helsing is one of the final shows to arrive on Netflix.

As previously said, Netflix in most foreign countries already has access to season 5. Season 5 was acquired by the majority of significant Netflix regions throughout the summer of 2021.

Netflix has announced that season 5 will be the final season. All of Netflix’s regions, including UK, CA and AU, have picked up the series near the middle of July 2021. The program is marketed as a Netflix Original outside of the United States.

Some of the major characters in the series Van Helsing who appeared in the first four seasons and are expected to make an appearance in the 5th season as well.

Christopher Heyerdahl as Samuel or Sam

When will Van Helsing season 5 be on Netflix in the US?

With all Netflix areas now streaming Van Helsing outside of the United States, you may be asking if it’ll still be available. Yes, but you’ll have to wait a little longer.

Everything Netflix acquires from NBC, USANetwork, or Syfy is released in a timely manner in the US, allowing us to anticipate when season 5 of Stranger Things will be available on Netflix.

All 13 episodes of Van Helsing season 5 will premiere on Netflix US on April 16th, 2022. This is due to the fact that Netflix acquires the show a year after its first episode debuts, which occurred on April 16th, 2021 in this case.