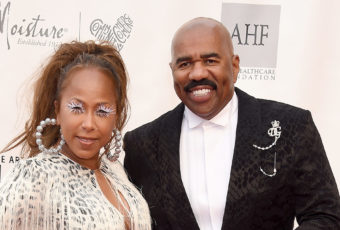 Marjorie Elaine Harvey is best known as the wife of Steve Harvey who have been married for 14 years. The pair has grown a large blended family throughout their time together. She holds American and African ethnicity. Her other surname Woods, which was gotten from one of her marriages. More details are not in public about Marjorie’s early life. Her mother named Doris Bridges. Moreover, she is 17 years younger than her hubby Steve Harvey. She was born with the name Marjorie Elaine Bridge.

Who Is Marjorie Elaine Harvey?

Marjorie Elaine Harvey is Steve Harvey’s third wife. The couple married in 2007. Marjorie grew up in Memphis, Tennessee, and had three children from previous marriages before she met Steve.

When he met Marjorie, Steve adopted her children and raised them as his own. The pair now has five grandchildren together. She is a designer, fashion blogger, and the co-founder of a non-profit organization for youth called The Steve and Marjorie Harvey foundation. Steve also addressed how he and Marjorie keep their relationship together. Steve revealed some of the couple’s keys to a long-term relationship.

Steve has been married three times, with seven children from previous relationships. His two daughters with Marjorie are Lori and Morgan. Michael B Jordan is dating Lori Harvey now. After months of speculation, the pair confirmed their relationship with a candid Polaroid photo. On November 24, 2020, they were seen traveling together in Mexico.

Steve, 64, discussed Lori’s new high-profile relationship while appearing on Jimmy Kimmel Live! on February 25. “First and foremost, let me make something crystal clear: he is a nice guy,” said Steve during his appearance on the ABC program.

All About Steve Harvey