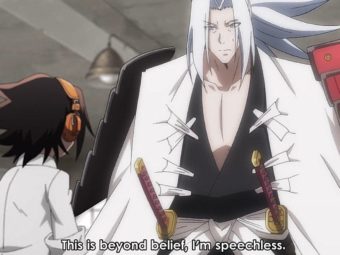 Anna and the future Shaman King’s new path after resolving Anna’s demons problems is seen in the 35th episode of Shaman King (2021). Demon Re was killed by Asakura Yoh with Ultra Senji Ryakketsu: Cresent Moon Purification.

The Shaman Fight will resume soon once Yoh decides to return, as he has quit after learning to suffer the loss of more valuable friends. After Peyote and Chubby Shaman crushed Ren, the show reveals Yoh’s history. In this episode, Yoh and Amidamaru discuss Matamune.

Matamuna sacrifices his life to protect Anna. Asakura Yoh also informs him that Hao was Matamune’s instructor. Since Yoh feels liberated after quitting Shama Fight, they believe they have enough time to talk about it. Ren comes back to himself and remembers when Ren gets wounded and realises that Yoh has chosen to assist Ren instead of pursuing his ambition to be the Shaman King. Asakura Yoh thinks the battles were pointless, but he still has things he needs to accomplish. Anna appears and asks Yoh if he is thinking about defeating Hao once again.

He tells her that he’ll make it up to her, but she reminds him of his promise to Matamune. Yoh knows that with the aid of Anna, he made a bargain with Matamune to defeat Hao in a Shaman Fight. Anna thinks they shouldn’t allow Matamune’s death go to waste. She asks what will happen to her because she is supposed to be the wife of a shaman king. Yoh apologises and gets slapped across the face. He rolls on the ground, and Amidamaru feels sorry for him because Yoh has begun to bleed. When they reach HQ, meet with the Maiden who guaranteed Yoh assistance, Ren’s rebirth will begin.