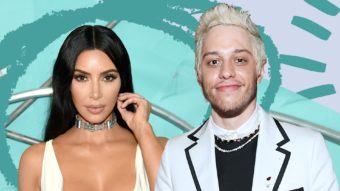 Pete Davidson referred to his “girlfriend” in the same interview in which we learned he has a Kim Kardashian candle and it was the official confirmation the world needed, apparently.

In a recent interview Kay Adams, of “PEOPLE (The TV Show!),” spotted a candle with Kardashian’s picture on it sitting atop the dresser in Davidson’s room.

The pair have been romantically linked since last year, but haven’t done much talking publicly about the state of their relationship.

But when asked about being famous Davidson said “I don’t have Instagram or Twitter or any of that stuff. So, most of my daily life is getting into cars and showing up to a set.”

“Or, if I’m off, I just either hang with my friends or chill with my girlfriend inside,” he said. “So I don’t do much.”

Kim Kardashian candle, “girlfriend” reference, you do the math.

The pair have been spotted publicly several times since they were first linked in October and of course there is that now famous kiss they shared during a “Saturday Night Live” skit when Kardashian hosted.

The reality show mogul, who is in the process of divorcing Kanye West, may be having a good Valentine’s Day this year as Davidson said, “this would be the first year that I’m thinking about Valentine’s Day plans.”

“It’s a big day, it’s another Super Bowl,” he said of the holiday which this year is the day after the Super Bowl. “A Super Bowl for the ladies.”

Pete Davidson publicly referred to Kim Kardashian as his “girlfriend” for the first time on Monday.

When asked if his heightened fame had led to a more “fun” lifestyle, Davidson simply responded that most of his days consist of him “showing up to a set” or hanging with friends or his “girlfriend.”

“Or, if I’m off, I just either hang with my friends or chill with my girlfriend inside. So I don’t do much,” Davidson told “People (the TV Show!),” referring to Kardashian.

Davidson’s namedrop marks the first time that he or Kardashian has publicly addressed the status of their relationship.

The Skims founder, 41, and the “Saturday Night Live” star, 28, sparked romance rumors after Kardashian hosted “SNL” and even shared an on-screen kiss in October. A few weeks later, the two went public and held hands.

Since then, the lovebirds have made the most of their romance. They have traveled to the Bahamas, had a pajama party with Kardashian and her mom, Kris Jenner, and most recently had an escape room date with Kardashian’s sister Khloé Kardashian.