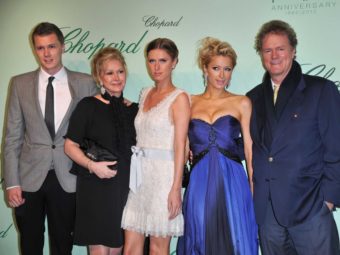 Paris Hilton is an American model, singer, businessperson, socialite, actress, and DJ who has worked with well-known labels such as Warner Bros. and Cash Money since 1997. She got famous worldwide after her then-boyfriend and now husband Rick Salomon, in 2003 leaked her sex tape later in the name ‘1 Night in Paris’ from 2001.

Music is a passion of Paris Hilton, who sings and works in the areas of pop, dance, and R&B. She is well-known and regarded as Conrad Hilton II’s great-granddaughter. She is better recognized for her role in earning several acting trophies for roles such as “Worst Actress.”

Paris Hilton was born on February 17, 1981. She is 40 years old as of February 20, 2021. Hilton was brought up in Manhattan’s Upper East Side by a wealthy Catholic family from New York City. Beverly Hills, California, served as her next residence. Hilton is an American citizen and a Catholic by faith.

At the Buckley School and St. Paul the Apostle School, both in Los Angeles, California, US, she finished her early education. She also went to Marywood-Palm Valley School in Rancho Mirage, California, US later on. She graduated from Professional Children’s School in New York City and Dwight School in Manhattan with a GED certificate afterwards.

Her great-grandfather was Conrad Hilton, the founder of Hilton Hotels, while her maternal aunts are television personalities Kim and Kyle Richards. Norwegian, German, Italian, English, Irish, and Scottish ancestry are among Hilton’s ancestors. The family was Catholic.

Mr. Richard ‘Rick’ Hilton is Ms. Paris Hilton‘s father, a successful entrepreneur who has built his fortune through hotels and casinos. Her mother, Mrs. Kathy Hilton, is a socialite and former actress.

She has three siblings and is the eldest. Her name is Nicholas Olivia ‘Nicky’ Rothschild, who is a businesswoman, socialite, fashion designer, and model from the United States. Barron Hilton II and Conrad Hughes Hilton are her brothers, both of whom are businessmen by profession.

Who are Venus and Serena Williams’ Other Sisters: Explored