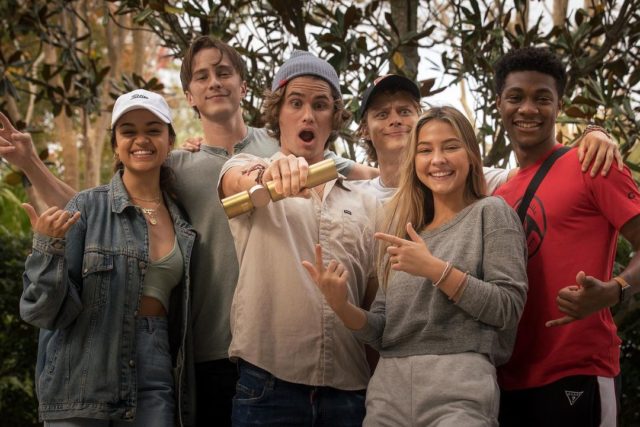 Outer Banks, a drama series about coming-of age dramas, was created by Jonas Pate Josh Pate and Shannon Burke. It premiered on April 15, 2020 on Netflix. The series was renewed by Netflix on July 24, 2020 for a second season. It was launched on July 30, 2021.

Outer Banks follows a tight-knit group of local teens in the Outer Banks of North Carolina. A hurricane knocks out the power supply for the summer season. This sets off a series of illegal events that forces the friends to make difficult decisions. Their summer is filled with adventure and mystery as they search for the missing father of their ringleader, engage in forbidden relationships, hunt for high-stakes treasure, and deal with rivals.

Chase Stokes is an American actor best known for his role as John B in Netflix’s Outer Banks. He has appeared in several other television shows including Tell Me Your Secrets and One Of Us Is Lying.

Madelyn Cline was cast in a short film titled Milites Christi. She rose to fame after being cast as Sarah Cameron on the Netflix series Outer Banks.

Rudy Pankow made his professional acting debut in a short film titled Sunny Family Cult, in 2017. He is a phenomenal actor and love his profession a lot.

Madison Bailey is a popular actress best known for her role as Kiara on the Netflix show Outer Banks. She has appeared on several other television shows including Black Lightning and Creepshow.

Drew Starkey was seen in the 2014 short film The Radical Notion of Gene Mutation. He has a brother named Logan and sisters named Brooke and Mackayla.

Austin Northmade his debut as an actor when he was just 8 years old in a church Christmas play. He was living in Atlanta at the age of 13 when he first began to receive great feedback from talent scouts. He stars as the character Topper on the series Outer Banks.

Jonathan Daviss began to make a name for himself after being cast as Pope on the hit Netflix series Outer Banks. He is very close to his mother and posted a picture with his mother to Instagram on Mother’s Day 2020.

Julia Antonelli is an actress and a singer. She rose to stardom as Jessie Novoa on Nickelodeon’s hit series Every Witch Way. In 2020, she began playing Wheezie Cameron on the Netflix series Outer Banks.

Lilah Pate is an American actress who is best known for appearing in the series Outer Banks. She has a good sense of dress and fashion, and a natural affinity for the camera. Warm yet enigmatic, she has attracted a range of fans and followers.

Charles Esten is an American comedian and actor best known for frequent appearances on Whose Line is it Anyway? In 2012 he assumed the role of Deacon Claybourne on ABC’s Nashville and has also played Morgan Ross on Disney’s Jessie.

Carlacia Grant is an actress best known for appearing in the 2016 TV series Roots. She also appeared as Danielle Turner in the TV series Greenleaf.

Caroline Arapoglou is an American television actress best known for her portrayal of Rose on the hit Netflix series Outer Banks. She was also cast on the third season of Stranger Things.

Adina Porter is an Obie-winning stage actress, she appeared in the 2001 Broadway production of The Women and in numerous New York Shakespeare Festival, Off-Broadway, and regional theater productions.

Gary Weeks grew up in Morris, Georgia. He was an excellent athlete, becoming a varsity baseball player, an all-state football player, and a 2-time state basketball champion.

Deion Smith was cast in the 2013 made-for-tv movie Teachers. In 2018, he guest starred on an episode of Homicide Hunter: Lt. Joe Kenda.

Cullen Moss is an Television actor who is known for his performances on Outer Banks and One Tree Hill. He was also cast in the 2004 romantic drama film The Notebook.

E. Roger Mitchell is widely recognized for his portrayal of Paul on AMC’s zombie drama The Walking Dead. He also appeared on the series The Shield. In 2020, he began playing the character Heyward on the Netflix series Outer Banks.

Brian Stapf is well known for his roles on House of Cards, The Walking Dead, and Outer Banks. He has also made appearances on Stargirl and Mindhunter.