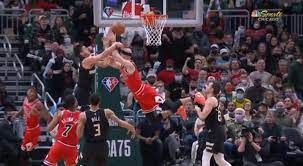 After Friday night’s game, the Milwaukee Bucks erased a rather cringe-worthy Grayson Allen tweet. The Bulls’ social media team was not amused by the response.

On Friday night, during the Milwaukee Bucks’ game against the Chicago Bulls, guard Grayson Allen was ejected for a flagrant 2 on Alex Caruso. Caruso went to complete a layup late in the third quarter when Allen undercut him and grabbed his left arm with his right hand, sending Chicago guard Alex Caruso to the ground. Caruso remained grounded for several minutes after Allen was ejected, and he never gave up hope.

The Bucks and Bulls aren’t exactly the friendliest of opponents, but Milwaukee may have pushed their rivalry to new heights with a harsh Grayson Allen tweet.

On Saturday morning, the Bucks posted a video of Allen eating a doughnut with the message “good morning.” It was horribly timed, given what happened the night before, when NBA commentator Robe Perez remarked: “has there ever been a tweet more likely to be deleted than this one.”

Who is Gaelle Pietri, the partner of late actor Gaspard Ulliel?

Caruso responds, is out for six to eight weeks

According to Caruso’s account, “it was kind of bullsh*t.” “He just took me out of the air, dude,” he continued. “I don’t know what else you can do about it. I’m just relieved that I didn’t have any bad injuries right away.”

“For Alex to be in the air and for [Allen] to take him down like that, he might have ended his career,” Bulls coach Billy Donovan said. “He’s had this happen before. That was really – it was quite dangerous. I hope the league does something about it because if he’d done that on purpose, it could have severely injured him.”

After playing college basketball at Duke, Allen has a little bit of a bad name. However, this was his first flagrant foul of the season.

According to Adriana Wojnarowski of ESPN, the Bulls have “expressed public and private outrage” over Allen’s conduct to the league office. Caruso sustained a fractured wrist during Saturday’s game, which will sideline him for six to eight weeks. He will require surgery next week.