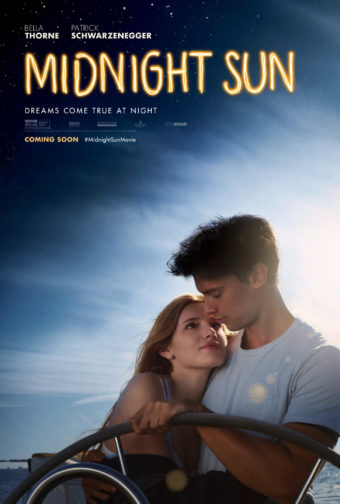 Midnight Sun is a 2018 American romantic drama film based on the 2006 Japanese film A Song to the Sun. The film was directed by Scott Speer and written by Eric Kirsten, with Bella Thorne, Patrick Schwarzenegger, and Rob Riggle in starring roles.

The tale follows a young woman battling xeroderma pigmentosum, which prevents her from going out into sunlight.When she meets a boy, she struggles to decide whether to tell him about her condition or pretend to live a normal life. Principal photography began on October 12, 2015, in Vancouver, British Columbia, Canada. The film was released in the United States on March 23, 2018.

Kaoru Amane, a 16-year-old girl who didn’t go to school but instead sang herself to sleep every night outside in front of a train station with a guitar in her hands, led an unusual life. She slept during the day and was active at night, which was contrary to the norm. Kaoru had XP (xeroderma pigmentosum), also known as the allergy to sunlight, which prevented her from being exposed to sunshine. Singing was Kaoru’s sole motivation in life and also served as her only link to the outside world. One day, something triggers a significant shift in her existence…

At 4:00 a.m., Kaoru returns home before dawn. Outside her room, she sees a high school student with a surfboard in his hands, who has come to observe her. Every morning, she watches him and his friends go to the beach, then goes to sleep.

The illumination of a lamp may be a subtle, yet important element of the film’s visual language. The moment between dawn and daybreak is a tense time for both lovers, when they are separated by just a few hours. Their destined encounter takes place during the last few hours before dawn, bringing together two people who would never have met during daylight. However, Koji isn’t aware of her illness. The two quickly fall in love with one another and continue to meet in the city at night. Then one day, an incident leads Koji to learn of Kaoru’s illness. Kaoru gives up her first love telling herself that, “I shouldn’t have allowed myself to dream of a happy life. I am not normal after all.” She even gives up singing. Koji seeing Kaoru at such a state encourages her by suggesting, “Let’s meet only at night,” and comes up with a brilliant present for her.

She had been leading a life carefully placing herself beyond the reach of harm, with no intent to pursue a dream. However, Koji had shone a light on her heart making her want to sing once again. However, her illness which has quietly progressed, has started to pressure her nerve system, keeping her from playing the guitar at her will…