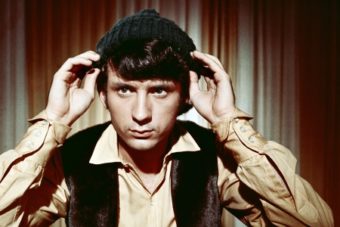 Michael Nesmith was ‘flying blind’ when he was chosen as one of the four Monkees for their live performance television show in the 1960s.

Raised in Dallas, Texas by his mother, a devout Christian Scientist, he didn’t share his mother’s moment of conversion, straining familial relations.

Nesmith left the Big D for Los Angeles at age twenty when his girlfriend got pregnant. He married Phyllis Barbour, but while driving to the Coast, he knew married life was not for him.

His only dream of a career was to make a living playing music and singing. He wanted to write songs even if he had nothing to say.

He couldn’t carry a tune and barely knew how to read or write music, but Nesmith fell into a music career by singing ‘goofy Dylan impressions.’ He banged on the strings of his guitar making noise but not music and somehow got gigs on the road with a friend who played stand-up bass behind him.

The duo made a little money playing the songs Nesmith writes.

Trying out his songs at the hot West Hollywood nightclub, the Troubadour, he was offered a publishing deal just when he was at ‘the end of the rope of games,’ he writes in

A friend advised him to answer an ad in Variety for a casting call for The Monkees, a TV show about to go into production. He was shocked to find himself hired, along with Davy Jones, Mickey Dolenz and Peter Tork.

Nesmith thought he was going to write songs and perform for a live audience as a band. But it was nothing like that at all. The four Monkees were supposed to show up on the set and read lines on a teleprompter.

He was revolted by the concept of the show, but the fluke that gave him fame led to a drug-fueled bromance with Jack Nicholson, brief friendships with Timothy Leary, Douglas Adams, John Lennon, a tawdry affair with his best friend’s wife and a shocking mysterious illness that left him paralyzed.

The Beatles had invaded America and transformed the music scene and the cultural dynamic. The Fab Four opened the door for two Hollywood producers to come up with the concept for the show, The Monkees, to ride on the success of this change in music from the ‘50s.

Nesmith, who had undergone quadruple bypass surgery in 2018, died at home Friday of natural causes, his family said in a statement.

Nesmith died from heart failure at his home in Carmel Valley, California, on December 10, 2021, at the age of 78. Dolenz memorialized Nesmith as “a dear friend and partner.”