Are Tiffany Haddish and Common Still Dating in 2021? 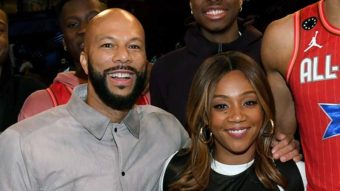 Finding love on set! After first connecting while playing love interests in the 2019 film The Kitchen, Tiffany Haddish and Common took their time time bringing their romance off screen. Scroll down to relive Haddish and Common’s love story.

Are Tiffany Haddish and Common Dating?

The actress and the performer are “such a great couple” and “bring out pieces of each other” that make them better.

“Tiffany gets Common to come out of his box and let loose and Common grounds Tiffany,” the insider shared.

According to the source, the duo’s inner circle “see them in it for the long run” and “love them as a couple.”

The couple met after they were both cast in the crime drama The Kitchen in 2019.

The duo quarantined together in the early days of the coronavirus crisis after having a virtual first date during their Bumble campaign.

Haddish announced that she was in “hands down the best relationship” she’d ever had during an appearance on the “Wild Ride! With Steve-O” podcast after months of romance rumors.

The Girls Trip star revealed that she and Common had discussed her interest in adopting a child someday.