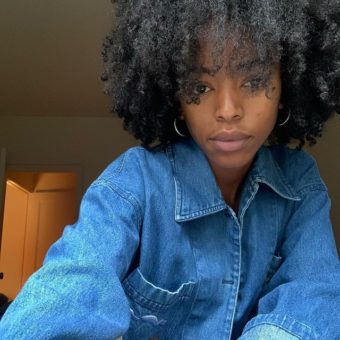 Lovie Simone is an American actress, best known for her role as Zora Greenleaf in the Oprah Winfrey Network drama series, Greenleaf. She studied at an acting school in New York and later appeared in a national commercial for JC Penney. Explore more about Lovie Simone’s Wiki, Bio, Age, Height, Weight, Boyfriend, Body Measurements, Net Worth, Family, Career and many more Facts about her.

Simone was born in New York City at The Bronx and raised in Orange County, New York. Her mother is African American and her father is Ghanaian.

She has a twin sister and a younger brother and sister.

He career began in 2009 when her manager discovered her at an acting school in New York City. Not long after, she booked her first national commercial with JCPenney.

Lovie Simone is single and not married.

She is single at these moments.

Some Facts about Lovie Simone

Simone was originally cast as a recurring cast member but was promoted to a series regular as of the second season.

Simone later made her film debut playing supporting role opposite Jennifer Hudson in the 2018 drama film Monster that premiered at the 2018 Sundance Film Festival.

The following year, she appeared in two drama films that premiered at 2019 Sundance Film Festival: Share and played a leading role in Selah and the Spades.

Both films has received positive reviews from critics.

Later in 2019, Simone was cast as one of leads in the horror film The Craft written and directed by Zoe Lister-Jones and based on the 1996 film of the same name.