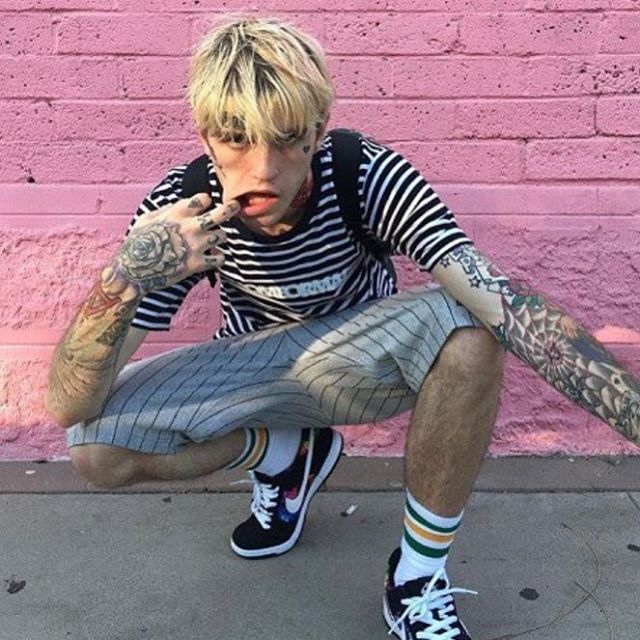 Lil Peep real name is Gustav Elijah Åhr. He was an American rapper, singer, songwriter and model. Initially, in 2014, he started releasing music on Youtube ans SoundCloud and later rose to prominence. After this, in a very quick time, he touted to stardom and began collaborating with Lil Tracy and several mixtapes like, Lil Peep; Part One (2015), Live Forever (2015), Crybaby (2016) and Hellboy (2016). Other than all this, his latter’s success led him to his first solo tour across the United States. Tune in bio of Lil Peep and collect some more information about him like age, height, weight, death cause, net worth, and many more facts about Lil.

How old was Lil Peep at the time of his death? His birthday is on November 1, 1996. At the time of his death, he was 21-years old. He was born in Allentown, Pennsylvania, and raised on Long Island, New York. He holds Swedish nationality. He was raised by his single mother. When Lil was of 14-years old, his parents were separated. As of his educational qualifications, he went to Lindell Elementary School and Long Beach High School in Lido Beach, New York.

How tall was Lil Peep? He had a height of 5 ft 10 in tall or else 1.77 m or 177 cm. His body weight was 68 Kg or 149 lbs. He had dark brown hair and eyes. At the age of 17, Lil got his first face tattoo, a broken heart below his left eye to help motivate him to make music. Later, he shifted to Los Angeles to pursue a career in music under the stage name Lil Peep.

How did rapper Lil Peep died? His death believed to be from an accidental overdose due to the effects of the pain medication fentanyl and the benzodiazepine alprazolam. Exactly two weeks after his 21st birthday, on November 15, 2017, he was found dead on his tour bus in Tucson, Arizona. He claimed to have consumed six Xanax pills. According to sources, Lil Peep had taken a nap around 5:45 p.m. before the concert. His manager checked on him twice and found him sleeping and breathing fine, but was unable to wake him. When the manager checked on Lil Peep a third time, he was unresponsive and not breathing. In addition, when his blood tests were positive for cannabis, cocaine and the painkiller Tramadol. Urine tests also showed the presence of multiple powerful opioids, including hydrocodone, hydromorphone (dilaudid), oxycodone and oxymorphone. There was no alcohol in his system.

Career Timeline: He was a famous, singer and model. He was a member of the emo rap collective GothBoiClique. When Lil Peep was a teenager, he called himself a loner who made most of his friends online. He began to grow in popularity soon after, with the song “Star Shopping”. Since his childhood, he was a interested in acting and modelling.

How much was the net worth of Lil Peep? His net worth was estimated around $12 million. Singing and modelling was his primary source of income.