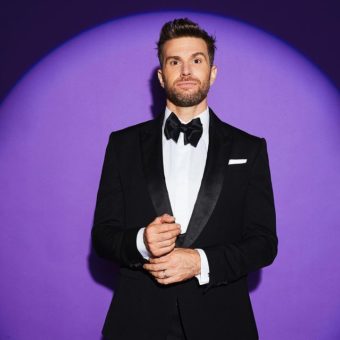 Joel Dommett is a British Standup comedian and actor best known as the host of the Made in Chelsea after-show Live in Chelsea and as a writer and performer on Impractical Jokers. He also made a name for himself in the acting world as Toby Wood on the 2010 comedy series Popatron and portraying DC Sweeney on the E4 drama Skins (UK). Tune in bio and explore more about Joel Dommett’s Wiki, Bio, Age, Height, Weight, Wife, Net Worth, Family, Career and many more Facts about him.

How tall is Joel Dommett? He stands tall with a height of 5 feet 9 inches and weighs about 73 kilos. He is a fitness freak as well. He has blonde hair and has light brown eyes.

Joel Dommett is married with lady, Hannah Cooper after she drunkenly slid into his DMs in 2016 with nothing more than an emoji. In May 2017, he was first seen out with Hannah, and duo have posted a naked picture together.

And the happy couple tied the knot on September 10, 2019 in a ceremony held in Mykonos, Greece. He also said,

“We had 28 people there. Some people have weddings where half the day is saying hi and bye to people. I wanted our closest friends and family to have a wonderful time.”

Who is Joel Dommett?

Joel, 36, is a stand-up comedian and TV host. He was born in Rockhampton, Gloucestershire, on June 8, 1985. Joel first found fame on-screen in 2010 after appearing as D.C. Sweeney in the hit E4 show Skins, but he was already a touring comedian at the time.

He appeared in BBC Two series Popatron and in 2011 he hosted Live in Chelsea, a discussion show revolving around Made in Chelsea.

The comedian also appeared in Impractical Jokers UK from 2013 to 2014 before becoming a panellist on Sky 1’s Bring the Noise in 2015.

Joel has devoted most of his life to comedy and performed his first gig at 19. In March 2019 he took part in All Star Musicals which saw him belting out show tunes before a panel of judges.

The funnyman has hosted The Masked Singer since 2020 and is now hosting it’s spin-off – The Masked Dancer. Most recently, he’s been revealed as the host of the 26th National Television Awards which will take place on September 9, 2021.

Joel Dommett is originally from Rockhampton, Gloucestershire and attended The Castle School in Thornbury. As a teenager he was a member of a nu metal band called Psirus, which played five shows.

Also, on 9 September 2021, Joel will host the 2021 National Television Awards ceremony proceeding David Walliams’ stint in 2020. He was on the long list for the best presenter but failed to make the final shortlist. His net worth is estimated to be $3 million, as of 2021.

Joel Dommett performed his first standup gig in 2007 at a bar in Los Angeles. Since then, he has performed standup routines around the world.

In 2012, he was the face of MTV News, often presenting daily news bulletins.

He hails from Rockhampton, Gloucestershire but moved to London when he was nineteen years old.

He served as a panelist for Nicole Scherzinger’s team on the Sky 1 music and comedy show Bring the Noise.

He proposed to his model girlfriend Hannah Cooper in December 2017. They got married in 2019.