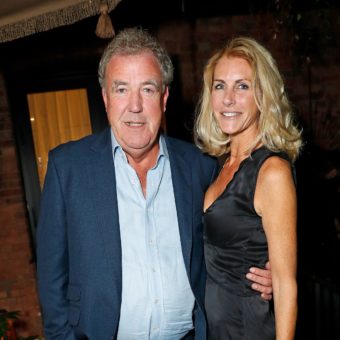 Jeremy Clarkson’s partner stars in Clarkson’s Farm but how long has he been in a relationship with Lisa Hogan for? Jeremy Clarkson is best known for presenting car series Top Gear with Richard Hammond and James May.

As the trio are no longer working together on the show, Clarkson has turned his attention to his new Amazon Prime Video series Clarkson’s Farm. But Jeremy isn’t taking on the new project alone.

How long has the Clarkson’s Farm star Jeremy Clarkson been with Lisa Hogan?

Lisa Hogan may be known as Jeremy’s girlfriend as of late but she is famous in her own right. The actress featured in the 1997 comedy movie Fierce Creatures, according to her IMDB page.

She was previously married to the nephew of Madrid-based billionaire Baron Heini von Thyssen, Baron Steven Bentinck. The former couple, who have three children together, split in 2005 and had their divorce finalised in 2011.

It is not clear exactly how long Jeremy and Lisa have been dating for.

But she first made a public appearance with the Who Wants To Be A Millionaire? host back in 2017.

This is when she accompanied him to the GQ Men of the Year Awards as his plus one.

So the couple has at least been together for the past four years.

Lisa stars alongside Jeremy in the Amazon Prime Video docu-series.

They appear to have a fun-filled relationship as she is seen making fun of him whenever he makes a mistake while learning about farming.

Speaking on the Andy Jaye show on talkRADIO, he said: “She describes me as chaotic and brilliant in the show but she normally calls me a lot worse than that.

“Lisa’s role in the programme is really to roll her eyes at me.”

How long has the Clarkson’s Farm star been with Lisa?

Talking to Amazon, Lisa explained how Jeremy was much more used to dealing with cars than cattle.

She said: “I have ended up learning a lot, largely as Jeremy didn’t have a clue and I’m quite practical.

“He knows roads, but he doesn’t know land that much.

“There was a big learning curve, but he’s such a prolific character, once he puts his head to something it’s just full-on.”