Is Goofy a dog or a cow? Everything you need to know 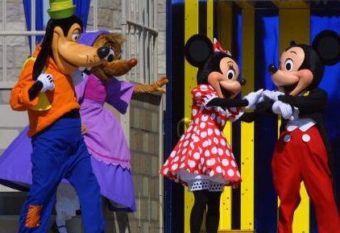 A viral social media message has generated a heated debate among Disney fans about whether Goofy is a dog or a cow. The real identity of the beloved Disney character was revealed by Myrna Nuarhpa on TikTok.

“How old were you when you found out Goofy was actually a cow and not a dog?” the video asks.

The video then claims Goofy is in fact an Aberdeen Angus cow and not a dog with human features.

“Am I late? My childhood is ruined,” the caption of the video said.

The identification of Goofy’s love interest Clarabelle Cow adds to the case for him being a cow. The post has struck a chord with audiences, receiving more than 880,000 views and 83,000 likes.

“Goofy is a dog. He was first introduced as a side character named “Dippy Dawg” in the 1930s,” one person pointed out.

“He’s a dog, former cast member here. It was something we actually had to learn,” another added.

“Did the person that wrote this ever what the Goofy move?!? Goofy has a son, that’s a DOG!! Not a cow!!” a third chimed in.

The character’s complete name is Goofus D. Dawg, according to The Mirror. It’s not the first time Goofy has come up on social media, but the video reignited a long-standing argument. On Twitter, users have engaged in a heated discussion about the most essential issue.

“I was today years old when I found out Goofy was a cow and not a dog,” one person said.

“Clarabelle is a cow, but not Goofy. They are drawn similarly, though,” another replied.

“I saw a post saying goofy was a cow and not a dog and started crying and now my bf is trying to prove he’s a dog,” a third chimed in.

According to the website Doctor Disney, Goofy is cited as being an anthropomorphic dog which means he has human features.

IS Goofy a dog or a cow?

Goofy has been mistaken for a dog since the appearance of Goofy in Walt Disney’s Silly Symphonies cartoons, which were made decades before his first appearance as an actual dog. Until rumors began surfacing on the internet that Goofy might be a cow, he had been believed to be a dog by numerous generations of children and adults. It has compared Goofy to Pluto but explained that Goofy has “more of a human character”. The site says: “Goofy was created as a human character, as opposed to Pluto, who was a pet, so he walked upright and had a speaking voice.”

Goofy isn’t a cow, according to Snopes.com, a fact-checking organization. According to another site’s report, Goofy is a cow since the Mickey Mouse clubhouse’s love interest is Clarabelle the Cow.

“While it’s true that Goofy and Clarabelle Cow were once an item, this is not proof that they were the same species of animal,” Snopes.com wrote. “Clarabelle was the sometimes girlfriend of Horace Horsecollar, who was a horse and not a cow, and the Disney universe includes multiple examples of inter-species couples: Ben Ali Gator, for instance, woos Hyacinth Hippo in Fantasia; Jessica Rabbit (a cartoon human) has a rabbit husband in Who Framed Roger Rabbit, and Miss Piggy and Kermit the Frog have an ongoing (if one-sided) relationship in the Muppet canon.”

What did Bill Farmer say about Goofy?

In a recent interview, Disney’s Bill Farmer, who has provided voices for Goofy, Pluto, and Horace Horsecollar, offered his opinions about the character.

Speaking to Yahoo Entertainment in 2020, the voice actor firmly said that the character is not a dog, and explained:

Farmer added: “He was my favourite Disney character. I grew up doing voices, and I loved cartoons. I always practiced the voices and became a stand-up comic impressionist for about five years before moving to L.A.”