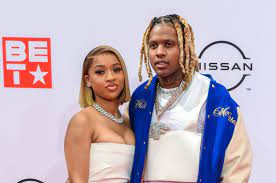 Rapper Lil Durk recently took the knee for his long-term partner India Royale, and he proposed to her. One fan sent a tweet suggesting that their own spouse gets a proposal, and they received an “hytb” response. When the screenshot was tweeted, many people were perplexed by the text slang, and many are still unsure what “hytb” and “mbn” stand for.

We’ll get into Lil Durk’s activities and reactions to the popular tweet as we delve into the abbreviated words’ meanings.

Lil Durk finally addressed the question of whether he’d propose to his long-term girlfriend and baby mother, India Royale, during a sold-out performance. On Saturday, December 18, the American rapper appeared at a radio station’s Big Jam event at the United Center, where he brought his family out on stage with him and got down on one knee.

The internet was abuzz with talk about the engagement after reports began to spread. Some fans, on the other hand, revealed their own plans for involvement. Someone named @LyssaLingLing posted a screenshot of someone else’s conversation about an engagement, which has now been deleted.

While the actual texter is yet to be identified, a forwarded Facebook screenshot of Lil Durk and India Royale is coupled with the iMessage “Durk proposed to India, mbn.” In response, the receiver of the text replied with three separated messages:

“All yu do is catch attitudes all day and accuse me of cheating nd you want a ring?”

The tweet has now been liked over 29,000 times, retweeted over 7,000 times, and provoked a hilarious comment section.

What’s the meaning of ‘hytb’ in a text?

What exactly does the acronym “hytb” stand for? You’re not alone. Many Twitter users were perplexed, asking what the four letters signified.

Urban Dictionary states “hytb” is an abbreviation of the four-word phrase:

This slang term sentence is used when questioning something.

In the example, the text message receiver was reacting to a proposal hint by asking why they would consider engagement as the next stage in their relationship. What does “mbn” mean in the first text shown in the screenshot?

Urban Dictionary defines “mbn” as an abbreviated term which stands for:

This statement is reportedly often used when people see others in cute relationships, implying they are jealous.

Take a look at the hilarious responses. With laughter and quips, social media users responded to the ridiculous onion ring statement.

Meanwhile, others advised people to abandon attempting to make celebrities their relationship aims. Others ask why the receiver is still with their partner if they would not even purchase an onion ring…