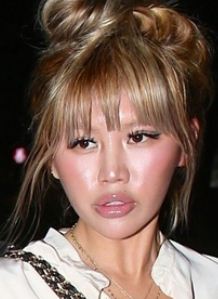 Erika Koike recently catches media eyes being the new wife of Nicolas Cage, an American actor, director, and producer. Cage and Koike applied for a marriage license and wed in Las Vegas on March 23. They had been dating since April 2018.

Just days after tying the knot, Cage sought an annulment on March 27, citing reasons that included being too drunk to understand his actions when he married Koike. The “Face/Off” actor said he and Koike drank “to the point of intoxication” before the wedding and argued he wasn’t aware of Koike’s “relationship with another person.”

Her age is currently 37 years old. Her stunning looks, great figure, and determination to strive for perfection have earned her the fame she enjoys today. As an artist, she has been featured in several fashion magazines and websites, making her a familiar face among fashion lovers.

Erika Koike married with Nicolas Cage who is an American actor and filmmaker. The couple got married at ‘Weddings at Bellagio’ in ‘Bellagio Hotel and Casino,’ Las Vegas. On March 27, 2019, Cage caught everyone by surprise by filing an annulment to end his marriage with Erika Koike only four days later. In June 2019, Cage was granted a divorce from Koike. According to the records maintained by a court in Las Vegas, he requested the court for a divorce if his plea for annulment gets rejected.

Moreover, Cage has been married four times. His first wife was actress Patricia Arquette (married in April 1995, divorce finalized in 2001).

Cage’s second marriage was to singer and songwriter Lisa Marie Presley, daughter of Elvis Presley. Cage is an Elvis fan and used the star as the base of his performance in Wild at Heart. Presley and Cage married on August 10, 2002, and filed for divorce 107 days later on November 25, 2002. The divorce was finalized on May 16, 2004.

Cage’s third wife is Alice Kim. They were married at a private ranch in northern California on July 30, 2004. She gave birth to their son, Kal-El, (after Superman’s birth name) on October 3, 2005. The couple separated in January 2016 and finalized their divorce later that year.

In March 2019, Cage married Erika Koike in Las Vegas, only to file for annulment four days later. In June 2019, Cage was granted a divorce from Koike.

Talking about her career, she worked as a waitress in her parents’ restaurant before shifting her attention towards becoming a professional makeup artist. Then, she landed an opportunity to work in the makeup department of Katja Niemi-directed Finnish short film ‘Hankikanto.’

How much is the worth of Erika Koike? Her net worth is estimated around U.S. $40,000. She stands on a height of 5 feet 7 inches tall and weighs around 65 Kg.