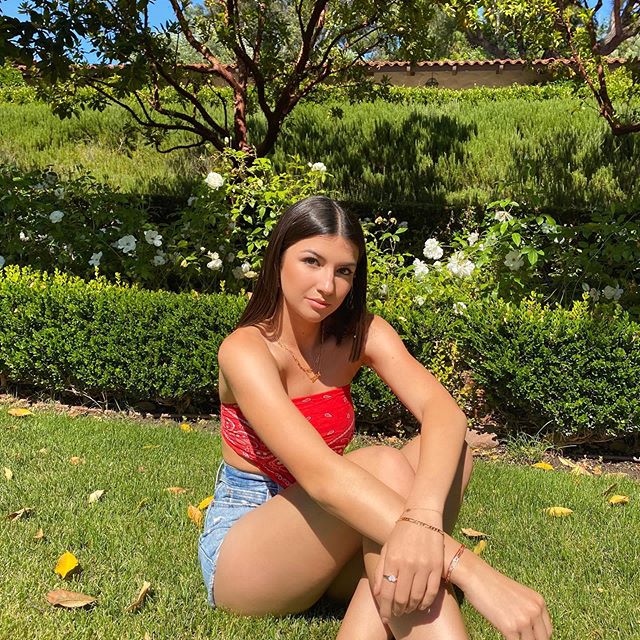 Ellie Zeiler is an American Social media star best known for her ‘elliezeiler’ TikTok account where she posts lip-sync and dance videos. She first gained popularity when Charli D’Amelio commented on one of her TikTok videos about how similar they looked. She played basketball and golf in middle school. In March 2020, she began actively posting on TikTok. She amassed million of followers in about a month. Her videos have earned her over 5 million followers on TikTok, as in July 2020. She posts stylish pictures on her Instagram account, which has earned over thousand of followers. She posted a TikTok video set to the Megan Thee Stallion song “Captain Hook” in April 2020. Moreover, she has been attacked by the fans of platform star Charli D’Amelio for allegedly copying her content, and hiding behind a fake account to deceive fans of the TikTokker. Let’s take a look at her family and personal life, including her bio, age, birthday, net worth, height, weight and facts.

Ellie Zeiler age is 16 years old. She is from San Diego, California. Her parents are named Rick and Sarah and she has a pair of twin brothers named Ben and Will.

Zeiler, born in San Diego, was a basketball and golf player in middle school before finding fame on TikTok. In April 2020, D’Amelio fans caught wind of a fake TikTok account called “charidamelio.” The content on the account featured videos of Zeiler, and that, on top of the misleading name, seemed to D’amelio fans to be Zeiler’s attempt to confuse TikTok users into believing it was D’Amelio’s personal TikTok. Zeiler quickly slammed the speculation that it was her posting the videos in the comments section of a TikTok Room Instagram post.

Talking about her career, who Ellie Zeiler is? She’s gotten a lot of attention for looking like D’Amelio, but also has a huge fan base thanks to her super entertaining content. Ellie Zeiler has been caught in the crossfire, after fans of D’Amelio accused the budding TikTok star of stealing content and intentionally deceiving other users because of their similarity.

A video went viral on Tiktok on April 21, in 2020 calling out an alleged account of Zeiler on Twitter for using Charli’s name to promote her own content.

The account, which was under the name ‘charidamelio’, dropping the L from the D’Amelio’s first name, reportedly had images of Zeiler up on their profile. The video also highlighted this account was liking content from ‘EllieZeilerr’, reportedly Zeiler’s Twitter profile. However, Zeiler has come out in defense of herself, saying that neither profile is operated by her.

The user behind the ‘charidamelio’ also clarified that she is neither D’Amelio or Zieler, and was instead a fan account trying to have a bit of fun with the two lookalikes. “This account has never been run by Ellie Zeiler,” they said. “Please don’t give her sh*t for something she has nothing to do with. It’s not Charli either.”

Charli D’Amelio herself is yet to comment on the controversy, although given how it’s taken over TikTok fandom over the last 24 hours, she’s likely aware of it.

She is not dating any one because she is not told anyone or share in social media. Currently, she is fully focused on her career. Her previous dating history is also not known in public domain.