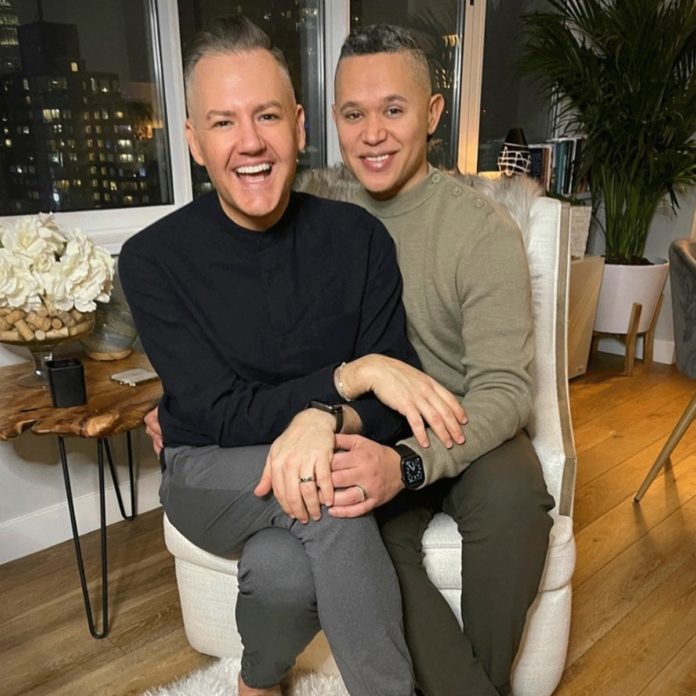 Dr. Wellinthon García is best known as the fiancé Ross Mathews, who is an American television host and personality. He first rose to fame as an intern and a correspondent for The Tonight Show with Jay Leno, on which he was known as “Ross the Intern”. Moreover, the RuPaul’s Drag Race judge and his husband tied the knot at Almar Resort in Puerto Vallarta, Mexico, on Saturday.

Ross Mathews married fiancé Dr. Wellinthon García in a beachside ceremony on Saturday. The pair, who met in 2015 at Almar Resort in Puerto Vallarta, Mexico, got married there. The couple exchanged vows before a group of 110 guests in custom grooms’ tuxedos from Robbie and Co. “It was a destination wedding,” Mathews, 42, says. “So we invited 130 people, thinking maybe 50 people would come. But 110 people came — and I’m thrilled!”

Because Mathews lives in Los Angeles and García in New York, the couple struggled to decide where to hold the ceremony. “It caused me such anxiety,” recalls Mathews. “But Drew Barrymore told us, ‘Do it where you’re supposed to do it, and the people who are supposed to be there will be there.’ So we chose the place where we first met.” Who Is Dr. Wellinthon García, Ross Mathews’s Fiancé?

Not only did Barrymore attend the wedding, but she also agreed to be the couple’s flower girl. “I was on the The Drew Barrymore Show,” frequent guest Mathews shares. “One day we were doing a story about weddings and she asked me, ‘Are you going to have a flower girl at my wedding?’ And I’m like, ‘Why? You want the gig?’ “

Mario Badescu, a brand that provides skincare products, provided gift bags to guests at the Almar Resort, including toner, facial SPF, and lip balm. García’s father represented the family’s parents as he walked him down the aisle. Racquel García was the title of honor for García, while Mathews’ brother Eric served as best man. Their nephews Evan and Andrew were ring bearers at the wedding. Russo was in charge of organizing the ceremony..

“The profound love shared by Ross and Wellinthon was felt by all of those in attendance at their beautiful and touching ceremony. The two exchanged heartfelt vows against the picture-perfect backdrop of an epic sunset painting the Puerto Vallarta, Mexico sky,” says Russo. Mathews and García wrote their own vows. “I wrote mine on the train into the city,” Mathews says, “and I just started to cry. It was so overwhelming, thinking about all the things I wanted to say to him.”

At OIS & Co., the couple exchanged rings designed by Jean Kemanjian. The guests ate bruschetta, sashimi, fresh fish, beef, salad, and a variety of vegan dishes after the ceremony. The wedding cake decided by García was red velvet. Mathews opted to hire local artists to perform at the reception.

“I want live music,” he explains. “It was crucial for us to have locals involved in this wedding.” We’re in Puerto Vallarta for a reason; we want the culture to stay there . Later on, it’ll transition into a DJ-led dance party.

Mathews also informs us that he would like to spend as much time with his visitors as possible. “We’ll spend a few days in Puerto Vallarta with all of our friends,” Mathews says.

“Then we’re going to Las Alamandas resort, which is located quite far away from Puerto Vallarta. We’ll stay there for a few days.” What comes after the honeymoon? “I’m not sure what happens next, but I’m certain we’ll be happy,” says Mathews. “This is the start of something wonderful.”