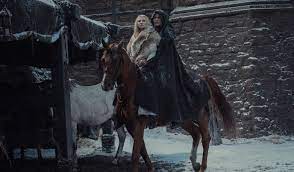 In The Witcher season 2, Henry Cavill reprises his role as Geralt of Rivia, the silver-haired monster hunter, and ahead, we’ll analyze if Roach dies.

The second season of The Witcher will be based on the Blood of Elves novel by Andrzej Sapkowski and will begin with the Time of Contempt. This portion will follow after the battle at Sodden and see Geralt return Ciri to Kaer Morhen so that she may be kept safe.

The series is an adaptation of Sapkowski’s novels, and the material was also adapted into a popular video game series by CD Projekt Red, which actor Cavill is a fan of.

The name roach is given to all of the horses Geralt of Rivia picks to accompany him on his journeys, and he has a soft spot for mares. The name is a Polish word that means “little.” The name comes from a common European freshwater fish, but Sapkowski called Geralt’s horse in the novels Płotka – a diminutive form of the word “Płoć,” which translates to “roach.”

Roach is a popular horse in video games, as certain cockroaches in CD Projekt Red’s The Witcher series frequently caused the horse to appear in baffling locations, such as rooftops, which has fueled numerous jokes.

Does Roach Die In Season 2?

However, in the episode 6 of season 2, titled ‘Dear Friend,’”Geralt’s trusted steed Roach” is killed off, just to make things worse.

When Ciri demolished the monolith, the city was invaded by Nilfgaardian troops, and Geralt went to survey the damage for himself – thereby opening a gateway for evil spirits to enter. The last time we saw Triss, she was attempting to educate Ciri about the breadth of her abilities. After being startled, Ciri inadvertently opens another portal.

The portal is a gateway for a winged creature to fly through, which results in Roach being murdered by the monster. The pair avenges the mare, but it’s too late.

Since the Witcher calls every horse he meets Roach, it’s possible that his next steed will become Roach 2.0.

How Many Episodes In Season 2?

The second season of The Witcher will contain eight episodes, which will be longer than the previous season’s six installments. All eight episodes premiered on Netflix on Friday, December 17, 2021, and we’ve listed all of the episode names below for quick reference:

The Witcher has already been renewed for a third season on Netflix.