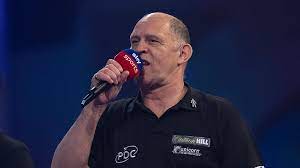 The World Darts Championship is in the midst of a championship, but who is Russ Bray, the renowned darts referee? When did he start officiating darts games? If you can’t picture Russ Bray in your head right away, he’s certainly one of the loudest.

The snooker referee is known for his raspy voice when calling games, and for the enthusiasm he adds when announcing scores of 180. But who is he? Where did darts official Russ Bray grow up, and how long has he worked in the world of darts?

How Long Has Darts Referee Russ Bray Been Around?

Bray is frequently chosen to officiate the biggest events in darts, such as the World Championship final. It’s his duty to determine a player’s total each time they visit the oche and inform them when they are on a “finish,” which means they have 180 or fewer points remaining.

Edward began his career as a darts referee at the local level in the 1990s.

In 1996, he was recruited to the PDC – the body which runs the World Championship – as a referee. He has become one of the most recognized voices in sports over the last 25 years thanks to his flamboyant and distinct calls.

How Old Is He And Where Is He From?

The darts referee is married to Sue and lives in Cambridgeshire with her. Bray was formerly a dart player for Hertfordshire.

After making a decent county debut, he promptly put down his darts once he got the experience of refereeing.