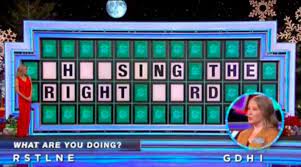 The game show Wheel of Fortune is a national sensation. The game show, which aired in 1975 and still runs today, has contestants competing against each other by solving word puzzles to earn money.

The Wheel of Fortune has had 39 seasons and the amount you win is determined by the infamous wheel. After a woman lost an Audi because to one silly regulation last night, there has been outrage on social media.

Who is Charlene Rubush? And what happened to her?

Who Is Charlene Rubush?

This week, Chelene Rubush was a contestant on the popular game show Wheel of Fortune. She made it to the Bonus Round with $16,500, where she had the option of winning a new automobile.

Nonetheless, the woman did not obtain an Audi, notably a Q3 model that sells for $34,000. Many fans feel she was dealt an unjust hand in the game of love.

Why did Harry Styles’ Capital One concert get cancelled?

In the Bonus Round, Charlene was given a set of letters and was instructed to guess the category as “What are you doing?” The letters were then added to the board, and a 10-second countdown began before she responded: “Selecting the correct card.”

She guessed the sentence incorrectly, so before the timer expired, she made another guess and said, “Choosing the right word.” She correctly identified the phrase, but viewers felt she had won the Audi when she didn’t.

The host then explained that she did not say the phrase continuously, and there was a short pause between each word.

“You know, this one’s tough, because you said all the right words, including the word ‘word’. But, as you know, it’s gotta be more or less continuous. We’ll allow for a little pause but not four or five seconds,” he said.

He continued: ‘I’m sorry. You did a good job in getting it, but we can’t give you the prize, and it was the Audi.”

Fans were outraged when Charlene slammed the decision on social media, alleging that it was unjust.

One person wrote: “Wheel of Fortune, you just lost a viewer. “I am choosing the right word” to never watch this show again. #WheelofFortune #choosingtherightword I’m done! I’m with that lady. She deserves that Audi! That rule is the most dumbest thing ever! She had it right before the time was up!”

“I don’t normally tweet about @WheelofFortune , but you guys just cheated that woman out of that car,” said another.

Charlene then received an Audi from Audi, which appeared to have been given to her despite the fact that she had not complied with their conditions.

Professional poker player and game show contestant Alex Jacob tweeted the Wheel of Fortune clip and wrote: “Come on @WheelofFortune, the woman literally chose the right word. Give her the car.”

Audi USA then responded to the tweet, writing: “You’re a winner in our eyes, Charlene. Now, let’s get you a prize. Time to #GiveHerTheQ3.”

We hope Charlene saw the tweet! She’s looking forward to getting her hands on an Audi Q3.