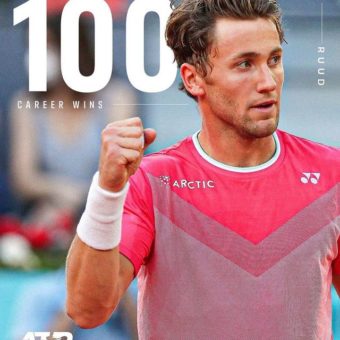 The Ruud family is a tennis family through and through. Their father, Christian, was a Davis Cup player for Norway back in the day. As for their mother, Gro, she was also a professional tennis player. She even reached as high as No. 61 in the WTA rankings during her career.

With such a rich tennis background, it’s no surprise that all three of the Ruud siblings have gone on to have successful careers in tennis. Charlotte and Caroline are both very talented players in their own right, and we could see them having a lot of success on the tour in the years to come.

Ruud has had an outstanding year so far, winning 30 of his 40 matches. He already owns two trophies: the Argentina Open and the Geneva Open. He also made it to his first Masters 1000 final in Miami this year. It will be exciting to see how Ruud performs during the grass-court season after he won the French Open.

He became the first Norwegian player to reach a Major final after reaching the Roland Garros final. His family was on Court Philippe-Chartier to support him in his confrontation with Rafael Nadal, who also had his family there.

Christian’s father and coach, Ruud, was a tennis player active during the 1990s and early 2000s. His highest ranking was 39th, which until Ruud surpassed him was the best for any Norwegian player.

The Australian Open was Christian’s finest showing at a Grand Slam in 1997, when he advanced to the fourth round against Goran Ivanisevic. He did put up a fight versus then-third seed Goran Ivanisevic before losing in five sets. In 1997, he made it to the quarterfinals of the Monte-Carlo Masters, defeating Yevgeny Kafelnikov along the way.