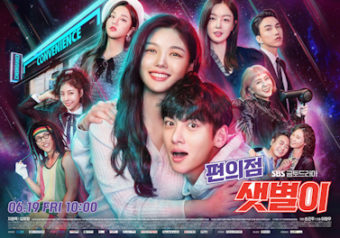 Backstreet Rookie is a South Korean television series that debuted on Lifetime in 2020. It was adapted from the 2016–2017 webtoon Convenience Store Saet-byul, which was written by Hwalhwasan. It is the first drama produced by Taewon Entertainment for Lifetime, who areending invested it worldwide.

The series aired on SBS TV at 22:00 (KST) time slot from June 19 to August 8, 2020 on Fridays and Saturdays for 16 episodes. It is available on iQIYI and on Rakuten Viki with subtitles in multiple languages globally.

After being dumped by a girlfriend, Choi Dae-Hyun (Ji Chang-Wook) stalks through a residential back alley in depression. Jung Saet-Byul (Kim You-Jung) sits nearby, looking at Choi Dae-Hyun with adoration. She thinks he’s cute and asks him to buy her and her friends a pack of cigarettes. Instead of purchasing cigarettes for them, he receives a lesson from them. He previously thought the girls were nothing more than knuckleheads, but now Sae-Byul is even more infatuated with him and pecks his lips.

In 2012, Choi Dae-Hyun owns a convenience store. High school girls frequently visit his shop to take photographs with him, but the business does not generate much money. Choi Dae-Hyun has also decided to post a “part-time worker required” notice because of the lengthy hours he has been working. Jung Saet-Byulwalks into the store sometime after midnight. She is now an adult and applies for the part-time position.