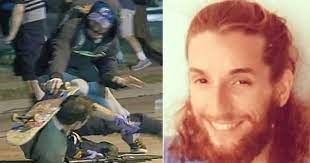 Anthony Huber was one of the two men shot and killed by Kyle Rittenhouse in Kenosha, Wisconsin, after protests and riots erupted in the wake of the police shooting of Jacob Blake. His relatives claim he died a hero while attempting to tackle a shooter, and that he was noted for his love of skateboarding.

Huber Was Remembered as Smart, Kind & a Semi Professional Skateboarder
Huber was a great skateboarder. “He was a well-liked skater in Kenosha, and he leaves behind his partner and young child,” wrote one comment author.

“This is Anthony Huber, one of the people shot dead last night in #Kenosha during the protests and chaos that followed,” journalist Pari Cruz tweeted, sharing this image.

“His partner, according to the obituary, described him as the smartest, most kindhearted, and loved individual she had ever met. She informed me he was a very talented skater who went semi-pro in his early teens. They’re hoping people will skate in his memory at Basik Skate Park in Kenosha to commemorate him #SkateForHuber #RIP.”

“I just want Anthony to be remembered as a guy who was simply trying to get on with his life after some early tough years, and who was making genuine progress in that area,” said Huber’s great-aunt, Susan Hughes. She spoke about his love of skateboarding at trial.

“No verdict will be able to restore Anthony Huber and Joseph Rosenbaum’s lives or heal Gaige Grosskreutz’s injuries, nor will it be able to repair the wounds or trauma suffered by Jacob Blake and his family,” said Wisconsin Governor Tony Evers in a statement following the verdicts.

The Washington Post reported that Huber and Jacob Blake knew each other; they had “friends in common and had smoked marijuana together,” so he wanted to participate in the demonstrations.

When cops arrived, they were met by a woman who requested assistance. Blake was wanted on a sexual assault suspicion when he was shot, and he had a knife and refused to surrender, in addition to attempting to get away in an automobile with young children, according to the DA.

According to The Post, Huber wanted to shoot the demonstrations because he was enraged by police shootings.

According to the Post, Huber had a difficult childhood and told his girlfriend, Hannah Gittings, and other friends that his mother was a hoarder, which created “constant stress.” He suffered from bipolar disorder. He met his girlfriend at a neighborhood pub and used heroin for the first time in seven years. Nonetheless, he was using a psychedelic vape pen.

The Washington Post wrote, “It was difficult for him to obtain employment once he was released from jail.” They slept on the couches of friends for a while; he assisted her in avoiding drugs, according to the Post. He skated to get out of “that filthy house,” Gittings said about the hoarding. But after his mother was evicted, Huber’s uncle allowed him to stay in it for a while. They cleaned out the house, and he saw it as a chance to “atone.”

The skateboard was the weapon, according to defense attorneys for Rittenhouse, that Huber used as a potentially fatal armament to stop Rittenhouse. The crowd, including Huber, had a lawful right to intervene against an “active shooter,” prosecutors said.

Here’s how it went down: Rittenhouse shot and killed Rosenbaum, who had pursued him into a car park and was lunging for his gun in an effort to obtain it, at extremely close range.

Then he ran down the street (according to trial testimony, Huber struck him with his skateboard for the first time here), fell, and was pestered by numerous individuals.

On the way to Rittenhouse, he is seen on video and photographs running him over with a skateboard for a second time, as well as attempting to take his weapon. Rittenhouse then opened fire, shooting him in the sternum. Huber dropped to the ground and died shortly after.

As he was approaching Rittenhouse, Gaige Grosskreutz testified that he brandished a firearm at him while advancing at close range. Rittendouse shot him in the bicep but Grosskreutz lived to tell about it.

Huber Had a Serious Criminal History

Huber also had a criminal record. Huber was convicted of disorderly conduct as a repeat domestic abuse offender in 2018 in Wisconsin, according to court records. It was only a misdemeanor offense. He was arrested for having drug equipment.

He was sentenced to three years in jail in Indiana, where he had been living since 2009. His most serious conviction came after he was found guilty of a felony for domestic abuse. He was also convicted of felony false imprisonment with a deadly weapon, according to the court records.

The judge acquitted him of a second-degree reckless endangerment charge, as well as two counts of disorderly conduct and one count of battery. He was banned from having weapons and was forbidden to contact any females.

In court, Rittenhouse’s defense attorney Corey Chirafisi gave more details about the case. It turns out it involved his brother.

In all of those instances, there were no contact orders and he was told not to possess weapons.