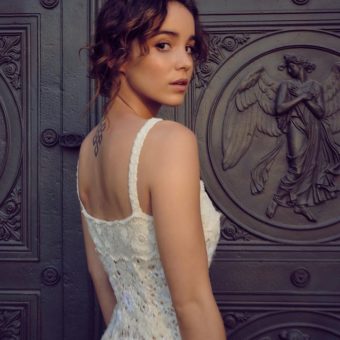 Alba Baptista is a well-known Portuguese-Brazilian actress. Alba began her acting career in 2014, when she was 16 years old, with the short film “Miami.” She made her debut on Portuguese TV in the same year, starring in a soap opera called “Jardins Proibidos.”

She later appeared in numerous Portuguese television series and movies. Alba was discovered at the European film festival, ‘Subtitle,’ in Ireland by international casting directors.

She was named as the ‘Revelation actress.’ She has starred in the Netflix series Warrior Nun, from 2020 to 2022. Read more about, Alba Baptista Bio, Age, Height, Weight, Net Worth, Boyfriend, Facts.

Who Is Alba Baptista?

When she was little, Alba’s mother traveled to Rio de Janeiro for work, where she met the actor’s father, a mechanical engineer. Because of her father’s job, Alba and her family frequently moved throughout the world, but she grew up in Lisbon, Portugal. She is the youngest of three children.

Captain America’s Evans, 41, has officially announced his relationship with 25-year-old Baptista on Instagram. They have been together for two years and she is an accomplished actor from Portugal who has already starred in numerous films.

On Friday he posted a video accompanied by three red heart emojis as they both laughed while remembering the various spooky episodes they shared during their time together.

Alba Baptista made her television debut in 2014 in Portugal with a soap opera titled ‘Jardins Proibidos,’ where she played the main character of ‘Inês Correia.’

Alba Baptista starred as lead role of “Ava” in Netflix’s series Warrior Nun, which was released 2 July 2020. She is represented by UTA Talents in the United States, Subtitle Talent in the UK, and Elite Lisbon in Portugal.

Some Facts about Alba Baptista