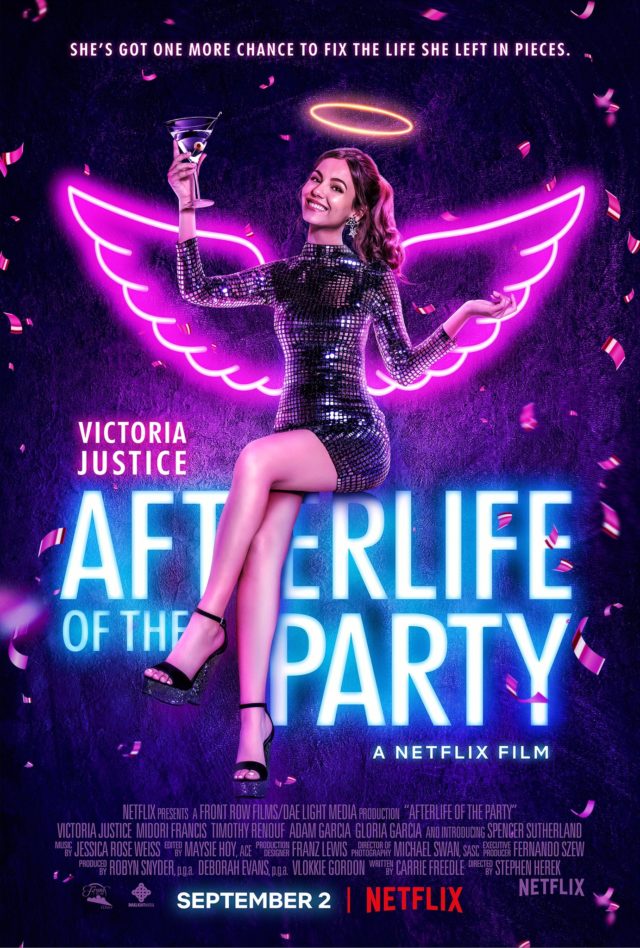 Afterlife of the Party is an upcoming American supernatural comedy film which is scheduled to be released by Netflix on September 2, 2021. The film touches on some heartbreaking content, After Life of the Party also focuses on finding the positives in life even in the worst situations. The movie mixes serious material with bubbly aesthetics and light-hearted moments from impromptu dance parties to Cassie’s fabulous wardrobe makeovers.

Afterlife of the Party Full Cast and Crew

Afterlife of the Party Release Date

Afterlife of the Party film is scheduled to be released by Netflix on September 2, 2021.

Moreover, in October 2020, it was announced that Victoria Justice and Midori Francis will star in Afterlife of the Party, a film directed by Stephen Herek for Netflix.

What is Afterlife of the Party about?

Afterlife of the Party is Netflix’s latest original movie starring Nickelodeon alum Victoria Justice. The film is labeled as a supernatural comedy and is directed by Stephen Herek and written by Carrie Freedle. Robyn Snyder and Deborah Evans serve as producers on the film according to IMDb.

Afterlife of the Party Story Explored

Afterlife of the Party is the story of Cassie (Victoria Justice), who is a young 20 year-old who decides to have a good time and forget all her troubles. She throws a multi-day party for her 25th birthday. She falls to her death after she is incapacitated in the bathroom.

However, the universe isn’t quite done with Cassie just yet. Cassie discovers in the afterlife that she has still unfinished business on Earth. Her guardian angel Val (Robyn) graciously grants her five days to rectify. Cassie will have a chance to get into Heaven if she succeeds, otherwise her soul will go to Hell.

Cassie is determined to repair the broken relationships that she suffered during her time as an angel-in training. Her first stop on this journey is reconnecting with her best friend, Lisa (Midori Francis), who is the only person Cassie can communicate with from beyond the grave. They set out to repair Cassie’s relationship between her estranged mother and grieving father. They work together to resolve their own issues and find closure.