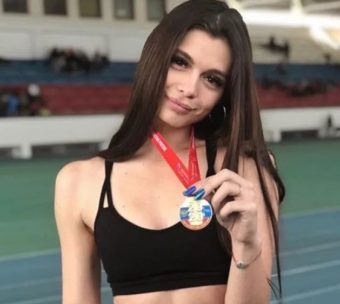 Who is Viktoriya Barkova, the Russian long jumper with cosmetics on her face and hoop earrings? The athlete won plaudits from internet users for completing a long jump while sporting full makeup and hooped earrings.

Viktoriya Barkova is a long jumper from Russia’s eastern region with a growing reputation for her talent and her laid-back attitude to the sport.

In April, the Russian under-23 long jumper will celebrate his or her twentieth birthday. On Instagram, he or she has over 100K followers.

She spends a lot of time on Instagram, where she is frequently seen wearing her trademark hoop earrings and sharing inspirational quotations to her fans.

Viktoriya is as well known for her Instagram and TikTok accounts as she is for her sports.

Why are people talking about her?

February was a hectic month for the young athlete, which helped her to rise onto the national stage in Russia.

She set her personal best for the long jump in the LFK CSKA stadium in Moscow in mid-February. Barkova soared to a 6.23 aggregate with her big hoops trailing in the air, which was noticed by many of her internet followers.

She reappeared on the ice two days later, this time ready for a night out, but she ran the 60 metres in 8.11 seconds instead. Reacting to Russian coverage of the event, the country’s u-23 Indoor Championships, one YouTube user commented: “Big earrings and eye lashes when competing in sports? Only in Russia.”

Barkova also competes in the 60m, 100m and 200m distances. She confesses, however, that long jump was her first love.

“To be honest, I have always had sympathy for this particular type in athletics. Perhaps this was due to the fact that my first competition was jumping,” she wrote on Instagram in September 2020.

She has also represented her nation at the u-23 level.