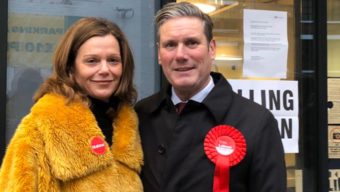 Sir Keir Starmer, leader of the Labour Party, and his beautiful wife, Victoria Starmer, are one of the most private couples in politics. With little known about their relationship, join us as we delve into Keir Starmer’s wife’s age and career.

Sir Keir Starmer, the head of the Labour Party, and his beautiful wife Victoria Starmer are one of the more private couples in politics. It is very little known about their marriage.

As for her spouse, Keir Starmer, the politician was born on September 2, 1962.

Who is Victoria Starmer?

Since 2007, Sir Keir Starmer and his wife Victoria have been married. According to The Sun, the pair resides together in their £1.75 million home in Camden North London.

The pair met when they were both lawyers in the 2000s, although the precise date is unknown. Lady Victoria has previously worked as a solicitor, while her husband received his knighthood for his efforts to end capital punishment globally, according to Tatler.

Victoria is now employed in occupational health, according to a Guardian profile from 2008. Victoria worked as a mentor to low-income youngsters previously. Victoria and her partner are extremely private about their relationship.

Who Is Bella Banos, The Model Dating Scott Disick?

Do Keir and Victoria Starmer have children?

Sir Keir and Victoria have two children together, but they have never been publicly identified. Their son and daughter live with them in North London.

Victoria is a follower of Judaism and believes her children should be educated about the religion in order to “recognize the religion of part of their grandfather’s family, and it’s crucial.”

Speaking to the Jewish Chronicle in March, Sir Keir Starmer opened up about his wife’s faith, saying: “As you probably know my wife’s family is Jewish. On her father’s side, there are bar mitzvahs, synagogues – there’s all the traditions.”

He also spoke about their Friday night dinner tradition, which sees his wife’s family invited to their Camden home for supper, saying: “It is about just being with the family. It’s about being a bit more disciplined, about being home with our children and the family – they are growing up fast.”