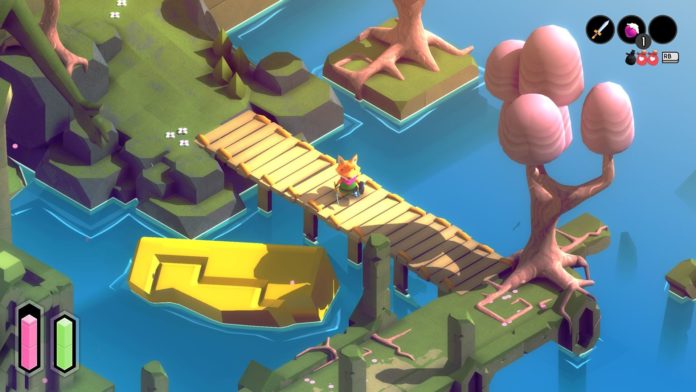 Tunic is a charming action-adventure game that hasn’t received much attention. It’s difficult not to think of the Legend of Zelda franchise when playing it. However, as Tunic does several things successfully for itself, it only has a passing resemblance to the Legend of Zelda series. For players to discover, this beautiful action-adventure game contains many mysteries beneath the surface.

However, those that put in the effort will be rewarded with treasure and extra resources that make the game easier. Any additional assistance you can get for Tunic would be helpful because the game may be as harsh as some other notorious games. Is it worth it to go through all of that trouble? Tunic Review: A Beautifully Difficult Journey.

Tunic is a beautiful game that stands out from the crowd because of its appearance alone. Each stage is stunning with bright colors and inventive lighting schemes that look fantastic. Furthermore, some of the motion changes, such as sliding through a portal or opening a door to a dreary cave, are particularly noticeable.

The sound design is also quite atmospheric and relaxing, making it easy to be immersed in Tunic’s peaceful areas or lost in the game’s darks.

The Instruction Manual, while confusing, is all the instructional material players will require. More information about your character and what you’re supposed to be doing becomes apparent as you advance and collect pages.

Finding the pages, on the other hand, might be difficult, and comprehending them may be even more challenging given their foreign language of origin.

Otherwise, the game does not offer any additional instructions. Instead of providing tutorials, the game relies on players to find their way around the map and discover what they need to accomplish. It can be enjoyable when it isn’t outright annoying. Finding your way through a specific location may be gratifying because you employed your intellect.

It’s worth noting that you can offer at the fox shrines if you’ve read the Instruction Manual, which will improve your statistics. You’ll discover chests with little fox idols or flowers inside as you go through the game. When you press LB near the statue, a menu appears offering to make an offering, accompanied by the price in game money that you’ll pay.

Tunic is an action-RPG in which players must unravel the mysteries of an ancient empire with their combined efforts.

The game has several systems that work together to provide a more engaging experience than its inspiration, classic top-down RPGs such as the earlier Legend of Zelda series. While the challenges and hints are simple enough, Tunic’s combat will force players to think outside the box.

The sense of being lost in Tunic is so strong that it’s difficult to tell if it’s deliberate. Even after you’ve acquired the map, you’re unsure where to go next when a door is locked. This might be a dissuasive for players younger than 13 years old who get turned around just looking for the beginning sword.

This is a bit of an issue, but it’s minor in comparison to the other pluses and minuses. There are not many save points like this. Each new area starts with a fox statue where you may usually save your progress.

However, because these areas are quite large, you’ll die numerous times before reaching the next statue. Every time you die in this manner, you must restart from the beginning of the area with the monsters respawning each time.

Forget about where you were. If you sign in after a little while, you will most likely forget which direction you are supposed to go from the save point, only to repeat a portion of the map that you’ve already visited. There’s no better method to figure out what to do than just recalling it from memory.

Finally, the combat may appear to be excessively difficult at times. While there are a few combos, the fight boils down to the same slow struggle time and time again. Even though you can solve fights quickly using a consumable tool, the actual conflict could be faster.

TUNIC is without a doubt one of the cutest and most charming games to be released this year. The artwork, lighting, and sound combine to create a lovely yet perplexing adventure that many people will enjoy.

However, you should be aware of how aggravating Tunic may be before you invest your money on it. Players looking for a beautiful game with a challenge will appreciate Tunic.