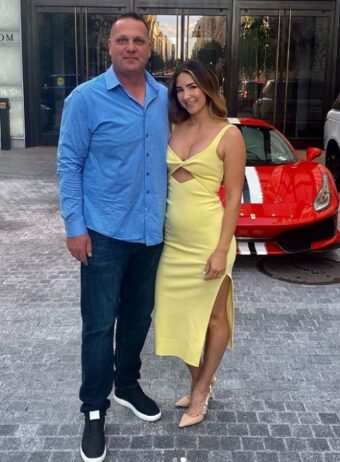 Trashelle Odom is a Canadian woman who became famous after accusing Corey Lewandowski of sexual misconduct. He fondled her in an unprofessional manner, according to Trashelle. Trashelle Odom Harassment Case On September 29, 2021, Lewandowski has removed from his position Odom all the accusations against him. On September 26, 2021, a charity event in Las Vegas was the site of the harassment incident. She and her husband ‘John Odom’ were among Republican contributors who went to an event at the Benihana restaurant at the Westgate Las Vegas Resort & Casino. Corey Lewandowski is a married father of three who shares custody of his children with his wife, Alison Lewandowski. She was at a charity dinner in Las Vegas, Nevada, when this guy harassed her sexually by touching her legs and buttocks many times.

According to the complaint, she alleged that Corey kept touching her inappropriately. His stalking made her feel violated and afraid. David Chesnoff is the attorney representing Lewandowski in this matter. According to David, Trashelle’s claims are evolving every minute in his statement. At the end of it all, Shor informed us that he and his client will not respond to them in any way. Corey Lewandowski was dismissed from his post as head of Make America Great Again Action. This was made by Taylor Budowich. Who Is Trashelle Odom, John Odom’s Wife?

Trashelle Odom is married to John Odom, a well-known Trump contributor and construction business executive. On July 7, 2017, the pair exchanged vows. Trashelle and John have five children together, including Holland Odom and Scarlett Odom. All of them reside in a huge mansion in Meridian, Idaho, the United States.

She stated in her statement that she was very fortunate to have a spouse like John who supported her when she disclosed her sexual assault experience. They attended on September 26, 2021, to support Victoria’s Voice Foundation This charity fights substance abuse awareness. She was sitting next to Lewandowski at the time, and he repeatedly molested her during an event that completely overwhelmed her.

Trashelle Odom is currently employed by her husband, who runs a firm named HMH Construction. Their firm is located in Nampa, Idaho, in the United States. She first worked for them in 2015. In addition to this, she works for a racing family business known as Odom Racing. It’s owned by Trashelle and John Odom, and she also manages it with him. They operate a popular YouTube channel where they post daily life vlogs with their family.

She has worked for many years as a successful businesswoman assisting her husband in his firm. Prior to joining HMH Construction, she did various sorts of work in a variety of industries. Trashelle Odom’s net worth is around $1 million – $1.2 million.