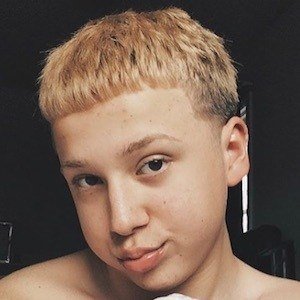 Timmy Thick is an American social media star, who became famous for his Instagram account. Timmy’s Instagram with a following of over 64 K fans on the photo sharing site. He gained fame in 2016 after uploading several pictures to his account. He also regularly posts updates about his life on ‘Twitter’. He is fond of uploading pictures that are both innovative and unique.

He has a great sense of fashion and makes it a point to look stylish and carry swagger in his ‘Instagram’ images and videos. Tune in bio and explore more about Timmy Thick’s Wikipedia, Bio, Age, Height, Weight, Girlfriend, Net Worth, Career and many more Facts about him!

How old is Timmy Thick? His birthday falls on August 21, 2002. At present, he is 18-yrs old. His zodiac sign is Leo. He was born in New York City, NY. He holds American nationality and belongs to mixed ethnicity. He is known for keeping his real name and the identity of his parents secret.

Who is the girlfriend of Timmy Thick? He has not given any insights about his dating life. Currently, he is single and very focused on his career.

What is the net worth of Timmy Thick? He launched career in 2016. He has had multiple issues with people reporting his Instagram account, resulting in it being disabled several times. His net worth is estimated over $500,000 (USD).

The person using the alias Timmy Thick on social media was born on August 21, 2002 in New York City, New York. Timmy Thick isn’t his real name, though. Timmy keeps his actual name private, and he keeps his personal life private as well: no one knows the name of his parents, or if he has any siblings.

In 2017, a popular YouTube account titled “LoveLive Serve” posted a video about Timmy titled “TIMMY THICK MUST BE STOPPED!” and the video, which got millions of views, earned him thousands of followers overnight and put him on the social media map.

During his rise to fame, his personal information has been subject to questioning: how old is Timmy? What gender is Timmy? What is his sexual orientation? Fans constantly asked these questions.

On March 17, 2018, Timmy’s Twitter account (which remains active) posted a controversial tweet. “Good Evening, “timmythick” was a 24 month sociological study conducted by Harvard University. We are now complete with our study. Thank you for your time,” the tweet read. The tweet forced many to reckon with the fact that they really did not know anything about Timmy or his personal life.

Babe.net seemingly debunked the claim by speaking with a Harvard University sociology professor, who claimed there was no such experiment.