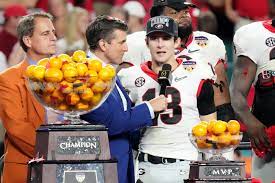 Stetson Bennett was a critical component of the machine as Georgia advances to face Alabama on January 11th. On New Year’s Eve, he completed 20 of 30 passes for 313 yards and three touchdowns in Georgia’s easy victory over Kentucky.

It was a much better showing from Bennett, who had at times looked to lack the confidence needed to be successful. Who are Stetson Bennett’s parents and girlfriend, and where does he go on vacation?

Stetson Bennett IV was born in October 1998, and he began his football career at Pierce County High School in Georgia. He was the son of Stetson Bennett III and Denise Bennett.

Stetson Bennett’s parents met at the University of Georgia and are both involved in the pharmaceutical business. The Bennetts own a chain of pharmacies throughout southern Georgia. His family first noticed his interest in throwing a football when he was three years old.

The young family frequently changed locations throughout the state, but Bennett’s commitment to attend UGA to play for the Bulldogs was steadfast. Stetson embraced his sibling Luke and Knox after a game in October 2021, according to Bennett’s father.

He is the oldest of five siblings. Following a game in October 2021, Bennett’s father posted a tweet showing Stetson embracing his brothers Luke and Knox in celebration of his team’s victory.

Who Is His Girlfriend?

Bennett has been in a long-term relationship with Cameron Liss, a fellow Georgia student. During her years at the institution, she studied toward a degree in Biology and Psychology. She worked at health facilities and clinics while studying.

On Instagram and other social media sites, Bennett has shared photographs of the two frequently.